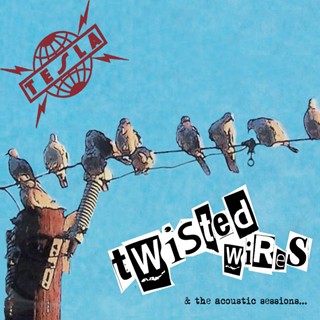 Production:
Produced and mixed by Tesla.

Review:
I’ve always had a love/hate relationship with compilation albums. Far too often they come across as cash-grabs for band’s that have run out of ideas or are half-assed releases by greedy labels looking to make a quick buck. Tesla‘s newest album Twisted Wires & The Acoustic Sessions… is thankfully a bit different — sure, it is a collection of previously recorded songs, but not their biggest hits. Also, it is acoustic, and we all know how Tesla spawned the acoustic craze in the early ’90s with Five Man Acoustical Jam and the smash hit “Signs”. So if anything, this new album could be considered a return to their roots, and they sound damn good doing it!

It would have been easy for Tesla to record unplugged versions of their biggest hits, but I think the inclusion of lesser known tracks and the more obscure hits on Twisted Wires & The Acoustic Sessions… will cater to more than just the casual fan. Where else could you hear re-workings of underrated gems like “Shine Away” and “Caught In A Dream”? Including a couple songs from the criminally underrated albums Bust A Nut and Into The Now is a great idea, but not necessarily one that will sell CDs to the average Joe who only remembers “Signs” or “Love Song” — I think that’s partly why I’m enjoying Twisted Wires so much, it doesn’t seem like a ‘safe’ release.

Few bands would be able to pull off such an album, but Tesla‘s soulful brand of hard rock is able to succeed plugged in or unplugged — partly due to the strong musicianship within the band and also because their songs contain more heart and soul than your typical ’80s hair band. “Caught In A Dream” was a mellow song to begin with, so the rendition contained here isn’t too much of a stretch but something like “Edison’s Medicine” takes on an entirely new feel and works perfectly in the process. I’m also digging the Climax Blues Band cover “I Love You”, “What You Give”, “Alot To Lose”, and with “Shine Away” always being one of my favorite Tesla tracks it goes without saying that I’m enjoying this rendition.

Two new compositions surface on this CD, “2nd Street” and “Better Off Without You”, and both stay true to the Tesla sound. Both are mid-tempo songs, and while the later builds itself up into the guitar solo, it is “2nd Street” that really shines with its sing-a-long chorus. Both tracks prove Tesla still have ‘it’ — and with that being said, how about a new studio album guys? It’s been three years already!

The first half of Twisted Wires & The Acoustic Sessions… features the current band while the second half, recorded in 2005, represents the final sessions with original guitarist Tommy Skeoch — so there is something here for everyone. Tesla has once again done an incredible job, and for those of us that remember Five Man Acoustical Jam was there ever any doubt?