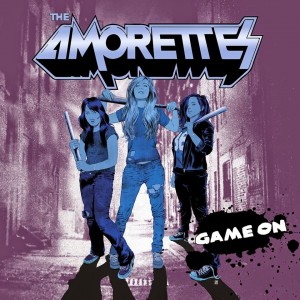 THE AMORETTES
GAME ON
Released on March 23, 2015 (Off Yer Rocka Recordings)

Review:
Yes folks — we have another very young all-female band cranking out hard rock from all the influences we feel are right and respected! Being an all-girl band, the influences drawn from Joan Jett and Girlschool (but only during the period when Girlschool wasn’t trying to sound like a female Motorhead) are undoubtedly going to be made and some comparisons cannot be denied. The Amorettes‘ style no matter which way you mash it up is straight up post-punk classic early ’80s hard rock.

The Amorettes hail from West Lothian, Scotland and are led by lead vocalist/guitarist Gill Montgomery and backed by sisters Heather and Hannah McKay on bass and drums respectively. Game On is actually their second album but first on a signed label. Two tracks “Hot And Heavy” and “Son Of A Gun” are reproduced and borrowed from their first effort ‘Haulin’ Ass’. Game On however keeps their energetic and youthful brashness intact. Notable tracks are the sassy “Daddy’s Got Money”, and the more Girlschool influenced “Rock Me Roll Me” and “Get What’s Coming.”

The Amorettes have been gaining a following slowly but surely across Europe already playing festivals and opening for acts such as Black Star Riders, Sebastian Bach, W.A.S.P., Black Stone Cherry and coming up soon Danko Jones. They are out paying their dues by playing clubs, festivals and any slot they can get.

Game On‘s style is nothing new nor ground breaking but refreshing to hear it cranked out from an all female band. With not a ballad to be found, the sound production has left Game On with the majority of a raw hard rocking edge which is fitting for their style of fun straight ahead rock. The McKay sisters’ backing gang vocals add a nice touch to most of the songs. If you’re a fan of NWOBHM, then this album is a must-have.

HRH TV – The Amorettes – Bull By The Horns

Bull By The HornsFrom the album, Game OnProduced by Chris TsangaridesFilmed and edited by Steedo for Rock n Roll VideoLive footage filmed around the country …