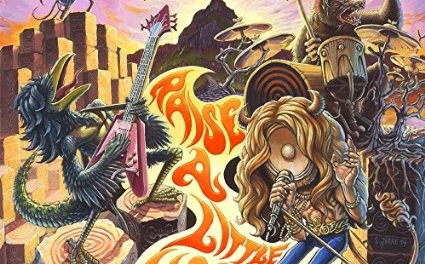 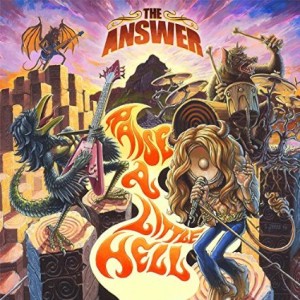 Review:
The Answer‘s Raise A Little Hell had been sitting on my work office’s desk for at least four months before I finally opened the CD packaging but ever since that time, it has been getting regular and sometimes exclusive rotation among the albums that I listen to on a daily basis. I first elected to purchase Raise A Little Hell after stumbling on one of the band’s videos although I am not sure which one at this point. Hearing one really good song is usually enough for me to purchase an album and that is what occurred with Raise A Little Hell. I do recall having purchased The Wild!‘s GxDxWxB at the same time and that stellar album was partly the reason for my putting aside Raise A Little Hell. Out of sight, out of mind and it’s only months later that I finally hear what turns out to be quite a strong record.

Raise A Little Hell isn’t the typical rock and roll fare that I listen to but similar to The Glorious Sons‘ The Union released last year, The Answer‘s Raise A Little Hell transcends musical genres and is the type of album that can (and should) have mass appeal while getting played on virtually any classic rock radio station. The songs on Raise A Little Hell are slower paced than what I am accustomed to but are for the most part so good that the lack of pace gets overlooked every time I play the album. Raise A Little Hell kicks off with the ultimate classic rock track — “Long Live The Renegades” — and surprisingly, The Answer keep delivering mostly track after track. “The Other Side” is a slow rocker chock full of melody and has a cool groove throughout. After the first four tracks which I really like, other favorites include the more energetic tracks “I Am What I Am” and “Whiplash” as well as the title track and album closer, which albeit quite slow paced is always a highlight.

Whenever a group offers more than ten songs on an album and in this case a bonus CD with six songs with three of them getting the acoustic treatment, there are bound to be a few duds or at least a few weaker tracks here and there. That is indeed the case with psychedelic rocker “Last Days Of Summer” and the very mellow “Strange Kinda’ Nothing” doing mostly nothing for me. The tracks on the bonus disc are weak compared to what is mostly contained on the album itself and the first two songs — “Feel Like I’m On My Way” and “Flying” — seem to be missing the melodic hooks that other tracks possess. The three acoustic tracks are simply a little too mellow for my liking. It’s one thing for me to appreciate The Answer‘s slower paced rock songs but to have to be subjected to slower versions of the band’s own tracks turns out to be the straw that broke the camel’s back for me!

Putting aside the bonus disc, The Answer have delivered a fine classic rock album in Raise A Little Hell that has the potential to cross many musical boundaries and ultimately could see the band enjoying a lot of success.