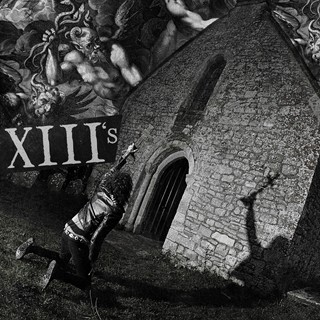 Review:
In an age of cut and paste, carbon copy “bad-ass” rock bands, it’s refreshing to come across the real thing every once in a while. Following on from 2012’s excellently grubby self-titled EP, The Black Bullets are back with Thirteens, a five track slice of dirt under your nails, rock debauchery.

The Southampton four piece, whilst looking like soap dodging miscreants, have actually become a very tight musical unit in the past 12 months. A full year’s touring experience has turned the band into an eight legged, booze guzzling, thrill seeking machine with balls like watermelons and serious musical chops — and it shows on EP opener “Thirteens”. Like AC/DC‘s “It’s A Long Way To The Top”, the song is a road trip boogie of cramped vans, cheap beer, cheaper women and unwashed socks — with shout along background vocals and everything turned up to 11. Think Supersuckers when they were good and you’re just about bang on the money.

The Black Bullets wear all their influences very proudly on their sleeves while still retaining a sound all their own. The third song on offer, “Untitled”, sounds like a missing track from Thin Lizzy‘s Thunder And Lightning sessions, whilst also stealing a healthy dose of Kill ‘Em All era Metallica — it sounds odd, but it works. In fact Rob Castle‘s vocals and phrasing is very reminiscent of Phil Lynott throughout Thirteens and the stripped down feeling of those early ’80s LPs is a very refreshing change from today’s uber polished output — it’s raw whilst retaining high production values. The easiest comparison would be Guns N’ Roses‘ Appetite For Destruction — a completely shambolic bunch of sleep, soap and common sense deprived reprobates turning in ultra tight performances.

Fuelled by cheap drugs, Sailor Jerry’s rum, tattoo ink and an addiction to heads down rock ‘n’ roll, this is fuckin’ good stuff. No showboating, no frills, just everything done for the song. All of which on offer here are around the three minute mark — a perfect “leave ’em wanting more” recipe for excess.

The Black Bullets‘ first CD sold out very quickly — word of mouth, plenty of gigging, and their mums’ buying 75% of them helped a lot. This latest release Thirteens is set to do the same, so grab an absolute bargain before the global economy ensures you’re living under a bridge somewhere.