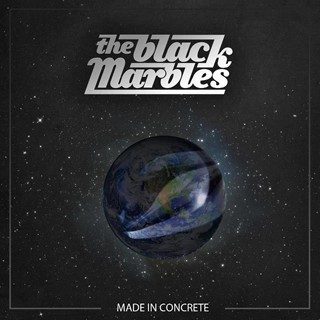 THE BLACK MARBLES
MADE IN CONCRETE
Released on January 28, 2013 (The Black Marbles)

Review:
The headline on The Black Marbles‘ Facebook page claims they are ‘classic rock with groove, energy, heart & soul’, and fortunately for me it’s every bit true. This is my first exposure this unique Swedish band and noticing that they list their influences as Bad Company, Free, Humble Pie, Faces, and the Rolling Stones it’s easy to see where these guys get their motivation on these songs from.

Opening track “Night And Day” is simply fantastic — it’s the kind of song that makes you hit the repeat button on your MP3 player. These types of songs come along once in a blue moon and I can see a roomful of people dancing along to this one at The Black Marbles‘ concerts. Oh wait, I’ve already played back this song four times, now onto the rest of the album.

“Loveshine” would not seem out of place on a Black Crows CD, and these guys could have perfectly opened for Led Zeppelin in the ’70s and had Robert Plant and Jimmy Page dancing along to their songs — someone transport these guys back to 1975. After only a couple songs the best thing about this album is that it will remind you to pull out some of those classic rock records collecting dust in your closet — the type that The Black Marbles must have sat up all night listening to before embarking on this album. That would mean Kansas, Queen, Bad Company, and the first two Black Crowes albums, then sit and say to yourself, ‘how the heck did they make a classic rock album in 2013 and manage to get everything right?’

By the time you get to “Good Lovin'” you hear an obvious homage to Pink Floyd‘s “Breathe” and “Comfortably Numb” with shades of the entire Wish You Were Here album — not a bad thing at all as these Swedes have created the perfect Pink Floyd song! Are we sure the guys in Pink Floyd weren’t in the studio with The Black Marbles? We may never know. “Free Your Mind” is straight off whatever your favorite Queen album is as I hear a lot of “Hammer To Fall” and “Tie Your Mother Down”. If you’re going to show off your influences, Queen is a good choice, so why not let vocalist Kaj Paxeus sing with Brian May and Roger Taylor!

My only issue with Made In Concrete is that the mix/production could’ve been cleaned up a little more — it’s not as dynamic as it should be. Then again, it does resemble the production of some of those old Bad Company records that obviously influence these guys. Lead singer Paxeus is unmatched in his ability to channel the ’70s. I now know that I must see these guys live just to see the audience reaction.

I can’t get enough of a few of the tracks on this album and my hope for the band is that they reach as many people as possible. Play these songs live and people will refer to The Black Marbles as their next favorite band from the ’70s. “Don’t Fade Away” could easily fit onto side one of Led Zeppelin III and I swear I hear Aerosmith‘s Joe Perry on “The Stealer”. These guys must’ve had a huge record collection growing up, now if they would just release a covers album and show up the original performers. They would for sure say, ‘who the heck are these kids, they’re better than we are!’ Buy this album ASAP.