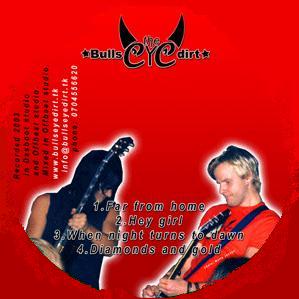 THE BULLSEYE DIRT
DIAMONDS AND GOLD
Released 2003 (The Bullseye Dirt)

Review:
Here is another new Swedish rock band, but one that leans more towards the punk side of things then straight up hard rock. Musically the band seems to have a strong 70s garage rock influence; and I love the band name!.

Every song on this EP clocks in at around three minutes, so you know things are going to be fast. The more I listen the more I enjoy the guitar sound on this release, especially on “Hey Girl” and “When Night Turns To Dawn”. Some of the riffs have an amped-up early Alice Cooper rock tone. However the vocals just don’t move me, they just don’t have enough grit and attitude for this type of music. Get your hands on a free demo at www.bullseyedirt.tk.