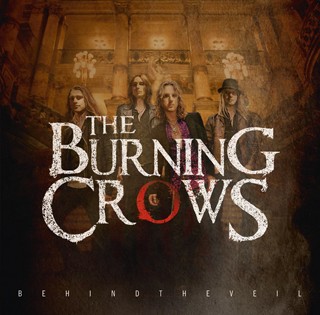 Review:
Yeah I know, all too often this new fad of crowd sourcing campaigns come across as nothing more than a cash grab for bands. Occasionally however, the ‘give me money’ plea can unearth incredible results — if you don’t believe me, check out The Burning Crows‘ full-length debut Behind The Veil.

A fourteen song album sometimes overstays its welcome, like a motion picture that drags on for eternity, but because Behind The Veil is so solid from top to bottom that stereotype can be thrown out the window. From the opening chords of “High” to the closing guitar carnage of “Best Damn Everything”, The Burning Crows offer a heavy dose of ’80s hard rock dripping with a bluesy influence. “High” contains some spine tingling screams that overtake the swagger of the song, but with a few listens it really started to grow on me — however that vocal explosion is, for the most part, an abnormality on Behind The Veil. Flawless songs like “All The Way”, “You, Me, Tonight”, “So Wrong”, “The Queen”, and “Slow Up, Get Down” take a more traditional approach, recreating the huge sound of commercial ’80 hard rock. I honestly believe if The Burning Crows had arrived on the scene in 1987 they would have fit somewhere between A-listers such as Cinderella and lesser known bands like Tora Tora — the chorus of “So Wrong” is so damn catchy there is no way it wouldn’t have been a hit single.

Even though The Burning Crows don’t really have a unique sound of their own, they play with such precision and write such memorable tunes that you can overlook any comparisons to groups that excelled 25 years ago. One of those cult bands that keeps coming to mind while spinning Behind The Veil is Shark Island — musically the two bands have little in common, but frontman Whippz often sounds like Richard Black, especially during the slower compositions such as “Here I Am” and “Devil May Care”. While the album as a whole is picture perfect, what really shines throughout is the guitar work of Whippz and Lance Daniels — the duo overfill Behind The Veil with memorable licks that any artist worth his weight in gold would be jealous of.

Behind The Veil is top notch from beginning to end, and the only complaint I have is that my eardrums are taking a beating because the album begs to have the volume cranked a little higher with each listen — but Tinnitus is a small price to pay for something this good. The next release from The Burning Crows will definitely be one to keep an eye out for and will certainly be a must have — just like Behind The Veil.