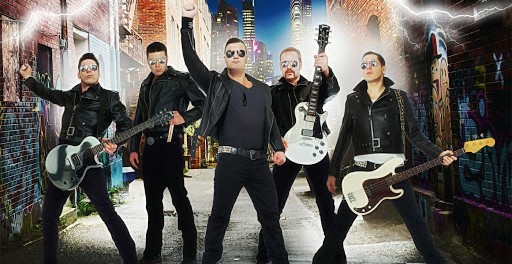 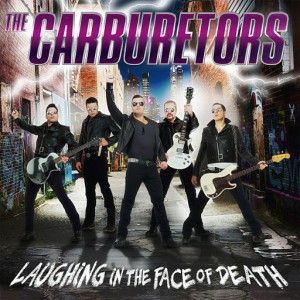 THE CARBURETORS
LAUGHING IN THE FACE OF DEATH
Released on November 20, 2015 (SPV Records)

Review:
The Carburetors from Oslo, Norway are a completely new band to me and also something of a surprise. I say this because when I see the band’s look, I would think psycho-billy with bands like The Horrorpops or The Hellfreaks. While I like some of this style, I don’t actively follow it nor listen to the genre at all really, so I would have generally passed this by.

So upon receiving the promo and reading it over, I thought I would delve further. So to my surprise, when I pushed play and closed my eyes, some notable bands came to mind while listening — a bit of AC/DC, a touch of Motorhead and a dose of Sweden’s Hell N Diesel as well as some slight power metal leanings in sound and lyrics (listen to Days of Metal for a good example). As I continued to listen, the singer’s voice was sparking up some mental sound files in mind since his voice was very familiar. A bit of research and I came to find vocalist Eddie Guz did time with Chrome Division, a darker version of this band, but with the same overall feel.

The album is basically good time hard rock, many songs of which you will wanna crank up the volume. There’s attitude and feel with tracks like “Hellfire” and “Bullet” and the Chuck Berry meets AC/DC tinged “Shot Full of Noise” will definitely grab you. One song that sort of threw me was the ballad “(Tonight We’re Gonna) Die Like Heroes” which is sort of jarring from the overall feel of the album. With its cheesy lyrics, lead vocalist Guz simply can’t quite get a good emotional feel in the song. It sounds a little forced but other than that you can find much to enjoy here.

Production wise I was pleased with everything. The guitars are rocking and clear. The bass does follow the guitars and is in the background for the most part, but it gets the job done. So all in all a pleasant surprise and something I will continue to listen to as fun background music in the studio.

Reviewed by Will “Lee” Bones for Sleaze Roxx, December 2014

The first video from the upcoming album “Laughing In The Face Of Death” – out on Steamhammer / SPV worldwide November 20, 2015.For more info and tourdates pl…