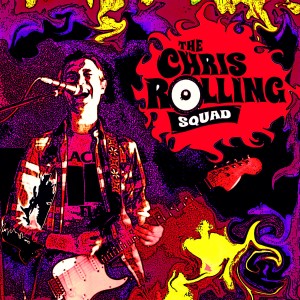 Review:
I was asked to review a five song EP by The Chris Rolling Squad. How difficult could that be? Well, as it turns out, it’s more complicated than that. There are many influences to this blues/rock trio from France. At first, I wasn’t crazy about the vocals, which have the range of your average Lemmy Kilmeister clone, but they grew on me after several listens. The EP is professionally produced and has a sound quality that will sell them to the majority of audiences. This is the kind of band that you don’t necessarily buy tickets for, but when you end up at a club and they’re playing, they capture your attention.

To the record then. “Whore” — the first song on the EP — has got a real Jimi Hendrix sound to it, much like “Voodoo Child”. Chris Rolling knows how to play his instrument. His guitar solo is blazing, with the bass and drums falling into a groove. “Help Me” elicits Stevie Ray Vaughn crossed with ZZ Top. Hard edge to the blues that almost harkens back to the psychedelic blues rock of the late ’60s — Canned Heat or Cream. “My Redemption” is a great rock tune, with a guitar line that could easily be Kenny Wayne Sheppard, or even Tracii Guns working with Devil City Angels. “Vampire Blues” sounds a lot like Stevie Ray Vaughn’s “Pride And Joy” with heavier reverb. It’s the most mainstream blues track on the EP. Finally, “Janet Says Go Go Go” is a rockabilly anthem. Strains of George Thorogood’s “Long Gone”, or pretty much anything by the Reverend Horton Heat.

I’ll grant you; this isn’t your typical Sleaze Roxx offering. It’s bluesy and ballsy, and lends itself to the genre, but without certain attitudes and stereotypes. There is no denying that everyone, from ’80s hair bands Johnny Crash and BulletBoys to Badlands and Cinderella, or current rockers Voodoo Circle or the Burning Crows, Electric Guitars or The Answer, has some blues elements and do it well but The Chris Rolling Squad does it just as well but just differently.

Unfortunately, the clips on YouTube don’t represent The Chris Rolling Squad‘s EP very well so check out the group’s page on Bandcamp.