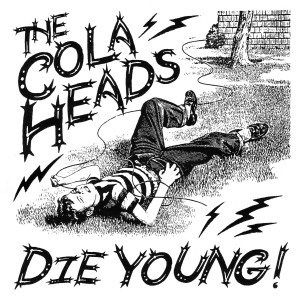 Review:
It is nice to see rock bands supporting each other in this ever difficult music market for independent bands — and even bands that have some labels behind them (see Sister Sin for example) — to make it and be able to support themselves simply by making and playing music.

I would have likely never heard of Toronto punk rock band The Cola Heads if it wasn’t for sleaze rockers Diemonds posting The Cola Heads‘ new video for the song “Die Young” on their Facebook page two days ago. While Diemonds have received quite a bit of coverage on Sleaze Roxx in the last few years — and deservedly so when the sleaze rockers deliver killer albums (their Never Wanna Die album landed the number three slot on Sleaze Roxx’s Top Ten Albums of 2015) — The Cola Heads‘ chances of being featured on Sleaze Roxx without some kind of assistance would have been more unlikely. Certainly, the band’s self-described genre of “skate punk garage rock music” on its Facebook page does not scream “Sleaze Roxx.”

However, having followed the Diemonds group for the last couple of years, I have found that although the band members’ individual musical tastes might extend into musical genres further than what my own personal taste goes to, Diemonds have actually introduced me to at least one cool Toronto band in the past by covering two songs from punk rockers Kill Cheerleader at the last show that I caught them at. Accordingly, given that — and only because Diemonds posted local Toronto band The Cola Heads‘ video of “Die Young” on their Facebook page — I decided to check The Cola Heads out. After all, there are many great rock and roll bands that have graced Sleaze Roxx that would have to be deemed to have quite the punk rock edge to them including the iconic female rocker Joan Jett, especially with her early solo material. As it turns out, Diemonds‘ two guitarists C.C. Diemond and Daniel Dekay are featured in The Cola Heads‘ video for “Die Young.” Who knows? Perhaps an actor position might be in the works for each of them? But I digress, it’s time to finally get to reviewing The Cola Heads‘ Die Young! EP. One listen of the EP confirms that the group plays a simple brand of punk influenced rock n’ roll.

With three of the four songs on The Cola Heads‘ Die Young! EP clocking under two minutes each — yes, under two minutes — and the longest song only lasting two minutes and nine seconds, there is no time wasted on any slow build-up of any kind or any extended guitar solos. Rather, lead vocalist Julian Swift starts singing on each track pretty much right away and each song is played at one speed — and that’s a fair pace of punk throttle speed — throughout. As can be anticipated with songs clocking at about two minutes or less, there is nothing complex in The Cola Heads‘ musical delivery. The punk rockers just play straight forward rock and roll set pretty much in one gear the entire time. While the songs on Die Young! are all good, the title track stands head and shoulder above the rest in that it is way catchier and likely has more crossover potential than any of the other songs on the EP. It is no surprise therefore that The Cola Heads elected to release a video for “Die Young.”

The Cola Heads remind me in some ways of The Ramones with their simple straightforward musical delivery. If The Cola Heads can inject a little bit more catchiness to their songs like on the EP’s title track and more variety, I think that these punk rockers have the potential to do very well.