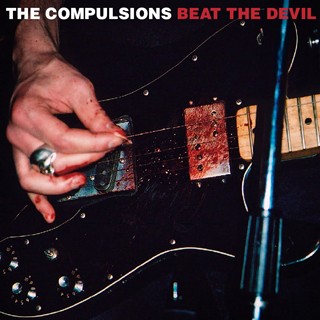 Review:
Eclectic — just let that sit there a minute… Because The Compulsions are not an easy band to pigeonhole (which is a good thing by the way). The band have been compared to the New York Dolls, The Rolling Stones and even AC/DC, but I think this does them an injustice, giving you a false impression of the randomness which awaits. Maybe it’s their revolving door cast of characters that means no two songs sound like they’ve been written with a theme in mind.

The opening salvo of “Hired Gun” and “I Just Wanna Play Guitar” are pure troubadour rock ‘n’ roll — all Johnny Thunders, Andy McCoy and Ron Asheton rolled into one very cool package. Then the first curve ball is pitched your way in the shape of “Dirty Woman Blues”. Like Monster Magnet on Gatorade instead of acid, it’s a trippy, blues based number borrowing its chorus from Pink Floyd‘s “Dirty Woman” — the song has great slide work and is different enough from everything else out there to surely get The Compulsions noticed.

“Yer Too Good Fa Me” is an Exile On Main Street outtake, surely? Laid back and smooth, the track is dirty enough to keep it from straying into schmaltzville. Then they do it again on “Eat My Dust”… BANG!!! 45 seconds of full on Discharge-esque, no holds barred, punk — where did that come from? And then they’re off again, this time into an electro/NIN/Rob Zombie tinged groove with “She’s So F****n’ Sexy”. The album’s closer, “Shut Yer Hole”, is a swamp dwelling, harmonica driven, ex-girlfriend hating, beast in the vein of Cinderella‘s “Bad Seamstress Blues” — only with this version there’s not a can of hairspray to be seen within 50 miles.

Because the ten songs on Beat The Devil go off in all directions it’s very difficult to feel any sort of flow to the whole thing. It’s like listening to a soundtrack album when you haven’t seen the film — all the songs are good, but you need some sort of context to put them into. Beat The Devil is a good record, but I can’t honestly say that it’s going to appeal to many people on account of how all over the place it is — I like that, but I fear it’ll keep a lot of folk away.

Reviewed by Hetfield’s Mullet for Sleaze Roxx, May 2012