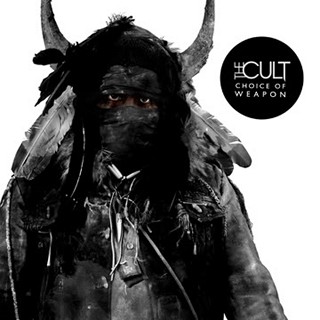 Review:
After a releasing the uninspiring Born Into This back in 2007, The Cult have returned. I’m surprised that The Cult has released a full-length album since singer Ian Astbury vowed that they wouldn’t do this again, rambling ‘the format is dead’ or something to that affect, and that they’d just release ‘capsules’ from here forward. However in 2012 Astbury and guitarist Billy Duffy, together since 1983 (with a couple of sabbaticals in between), have released their 9th studio album entitled Choice Of Weapon.

The Cult have come full-circle with Choice Of Weapon, as it is their most consistent effort in years and combines sounds of the past, present and future. I must say that this is the strongest Cult line-up to date — featuring Astbury, Duffy, drummer John Tempesta (of Testament, Exodus, and White Zombie fame) and bassist Chris Wyse. Tempesta and Wyse shine on Choice Of Weapon as one of the most pretentious rhythm sections I have heard in a while — this is no doubt due in part to The Cult reuniting with producer Bob Rock, who is known for cranking out some ‘big’ sounding albums. In addition to Rock the band brought in their friend Chris Goss (Masters Of Reality) to co-produce — but there is no need to fear about having ‘too many cooks in the kitchen’ while the recording of this album took place, as Choice Of Weapon is a seamless album that flows very well. The sound is stripped down, bombastic, and most importantly, the songs are extraordinary.

Right out of the blocks The Cult sets the tone with the opening “Honey From A Knife”, which is a rockin’ track that can go toe to toe with “Rise” from Beyond Good & Evil. That song, and the first single “For The Animals”, scream ‘play me live’ — and both will have you burying the gas pedal to the floor board and quite possibly earning you a hefty speeding ticket. In addition, the aforementioned could be placed side by side with classic cuts from Electric and you’d mistake them for bonus cuts — not filler. “The Wolf” has a vintage Cult sound that’s reminiscent of something from the Love sessions — clearly it isn’t, but that’s just how strong Choice Of Weapon is. The ballad “Love > Death” is among one of the best The Cult has ever recorded, bar none, while “Lucifer” is a refreshing take on psychedelic rock and another in the line of the standouts on the album.

Ian Astbury is in top form as he’s stepped it up not only as a singer but also as a lyricist. Billy Duffy meanwhile unleashes a series of blazing solos and tremendous riffs of which the songs are based around. The Cult is alive and well — they are revitalized, fusing classic rock ‘n’ roll and modern rock brilliantly. You can add Choice Of Weapon to the list of fine works by The Cult alongside Love, Electric, Sonic Temple and Beyond Good & Evil. Now we anxiously await the guys taking this album on the road and breaking in the new material.