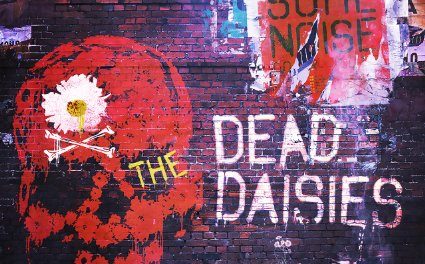 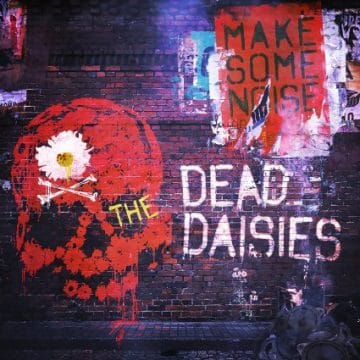 THE DEAD DAISIES
MAKE SOME NOISE
Released on August 5, 2016 (SPV)

Review:
When it was announced earlier this year that The Dead Daisies‘ members guitarist Richard Fortus and keyboardist Dizzy Reed would be leaving the band, speculation began to arise as to whether it was to tour with the reunited Guns N’ Roses. A few months passed and in time those suspicions became reality.

I quickly wondered who they may get as replacements for both. As it turned out, Reed was not replaced and Fortus would be replaced by none other than former Whitesnake/Dio guitarist Doug Aldrich. I was very excited. I had been a fan of Aldrich for many years. I own pretty much everything he has ever done. Aldrich came to The Dead Daisies with a long resume. His credentials include Lion, Hurricane, House Of Lords, Bad Moon Rising, Burning Rain, Whitesnake and Dio; not to mention a couple of really stellar instrumental solo albums.

With Aldrich’s addition, the band quickly went into the studio. Singer John Corabi, bassist Marco Mendoza, drummer Brian Tichy, rhythm guitarist Dave Lowy and Aldrich could be seen daily on their Facebook Page writing and recording. I really wondered what this album would sound like. This is a pretty stacked line-up.

The Dead Daisies‘ third album was released in August 2016. I was quick to purchase it. It arrived, like most of my music does, these days, via Amazon. I quickly put it in my CD player. And to what did my ears hear? A solid dose of straight ahead heavy rock n’ roll. Like its predecessor Revolucion (2015), The Dead Daisies‘ new work was nothing short of brilliant.

The album’s leadoff track “Long Way To Go” gets things off to a very nice start. With a chugging guitar on the right side only, a second guitar quickly comes in with a few bluesy licks. The build-up continues with another AC/DC type lick overtop the chugging riff. The drums kick in and I am immediately tapping my toe. Corabi chimes off “There’s something going down on the streets right now.” This is an undeniably powerful rock track. As the song goes along, I can’t wait to get to the guitar solo. Aldrich does not disappoint. This solo isn’t like it would have been in Whitesnake though. It suits the song perfectly.

“We All Fall Down” starts with guitar, drums and bass with a subtle talk box underneath the groove. As I am listening to this, I am reminded of the Corabi I remember back in his Angora and Scream days. The bluesy style of the music compliments his voice perfectly. Aerosmith comes to mind for this track especially. It could be the style of the riffing and the tight snare sound a la Joey Kramer.

“Song And A Prayer” is a favourite so far. The verse has great guitar riffing with an amazing vocal delivery from Corabi. The chorus is very catchy and has you singing along immediately. The underlying guitar beneath the chorus is infectious and adds very nice color. In typical Aldrich fashion, the guitar solo is well thought out and executed with intensity.

“Mainline” changes the mood slightly… ’70s punk rock quickly comes to mind. It’s fast and ferocious, like a lion eyeing its kill. It moves nicely and doesn’t slow down until after the solo where on the cool breakdown, drummer Tichy hits quick rim shots on the snare, while bassist Mendoza plays fast notes on the higher position of the bass. It wouldn’t be long until Corabi proclaims “You can’t fight it, can’t deny it, realize it, don’t look so surprised.” And the band breaks back in with supreme velocity. I wasn’t sure about this track at first, but it has quickly grown on me.

The title track “Make Some Noise” starts off with a heavily reverberated drumbeat courtesy of Tichy. I think this is The Dead Daisies‘ attempt at writing an anthem. Goal achieved. Corabi, with all his cool swagger, then comes in with vocals overtop of the beat. The guitar and bass would follow after each verse is sung. A really heavy great sounding riff. The huge, sing along chorus really makes the song powerful.

“Fortunate Son” is the first of two cover songs that appear on the album. The song starts with a cool beat, with slide guitar on the top. This really reminds me of The Joe Perry Project‘s “Let The Music Do The Talking” (later covered on Done With Mirrors by Aerosmith). The band kicks it in and the CCR classic is put to the test. Although it’s a CCR song, the arrangement and the intensity that is put into this song leaves the impression that The Dead Daisies have made it there own. I am always impressed when a band can take a classic and really make it sing.

“Last Time I Saw The Sun” is another track that reminds me of Aerosmith from the ’70s. Corabi‘s presentation on this song is very Steven Tyler. Great slide guitar are heard throughout. Joe Perry would be proud.

“Mine All Mine” starts with a great riff with the second guitar providing power guitars from behind. The tempo then changes slightly with a sleazy riff driving the song towards the vocals. I really love the groove of this song. The dynamics and build up into the catchy chorus are also something that show the pure talent of the musicians providing the song.

“How Does It Feel” keeps the album flowing. More great riffing provided by Aldrich and Lowy. The bass and drums drive like a locomotive going full steam ahead. Great background vocals throughout the chorus, which actually reminds of something Corabi previously did in Union.

“Freedom” possesses another in your face guitar riff that chimes off the song. These guys are the riff masters. It has that Guns N’ Roses/AC/DC feel to it. The section going into the solo shows Aldrich at his finest. He plays an intense section going in and from there just rips your face off with his precise technique and feel. The solo fits perfectly.

“All The Same” is a brilliant track that has a bridge that sounds like it should have been on Aerosmith‘s classic album Rocks. It builds up really nicely making you anticipate the chorus to come. Wait for it, wait for it… Then the chorus hits and the catchiness is infectious. You’re singing along, wanting it to never end. But it does and you’re left feeling like you want to hear it again.

“Join Together” ends the album off nicely. The last of the two cover songs on the album. The Dead Daisies do The Who’s classic, supreme justice. Like they did on “Fortunate Son”, they make it their own. I am not usually a fan of cover songs, but these two covers really add to this great album.

Looking at this album in retrospect, I really can’t find a single flaw throughout. This is a pure, ’70s sounding heavy rock record. I really believe that John Corabi has found the right band for his vocal stylings. I love his work on the Mötley Crüe‘s self-titled album, although it is far from my favourite Crüe album. Please take that with a grain of salt. That is a fantastic album, but Mötley  is Vince, Nikki, Mick and Tommy. Make Some Noise truly surpasses his work with Union, which was decent as well. There just seems to be something in this work that brings out the best in Corabi.

One last note before I close off… This album is also available on 180 gram, red vinyl. It is a two vinyl set. The album cover is slightly different and in my opinion sounds superior to the CD. The separation of the tracks make it so much more. It is available, on vinyl through Amazon.

THE DEAD DAISIES serve up a slamming dose of rock with “Long Way To Go”, the first single off their highly anticipated new album “Make Some Noise” – Album in…

The Dead Daisies‘ “Song And A Prayer” video:

The Dead Daisies – Song And A Prayer (official short film)

The official short film for “Song And A Prayer” from The Dead Daisies’ album “Make Some Noise”. Check it out here: https://thedeaddaisies.lnk.to/MakeSomeNois…

Check out “Make Some Noise”, the massive title track of our new album, which will be released on Aug 5th, 2016.Stream, download, pre-order album and check ou…