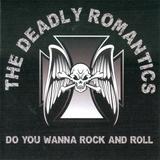 Review:
Gruff, attitude driven vocals like those found on The Deadly Romantics debut EP are what make sleaze rock so great. They are the dirty sounds of the underground, spewing anger through their sonic attack. Scotland’s The Deadly Romantics have captured that anti-establishment attitude that made bands like Circus Of Power cult heroes.

The title track, and by far the best of the four songs, is overflowing with disdain and some great lyrics such as; “I got 24 hours in your shitty little town, I don’t have time to sit and fuck around.” You quickly get the feeling that these guys would get as much pleasure from ‘curb stomping’ their fans as they would from playing music for them.

The remaining three songs don’t reach the lofty heights of the first track, but the band shows great promise as the bad attitude never wavers. If punk rockers are so pissed off with the establishment and the world, why don’t they sound as angry as The Deadly Romantics? This band pulls no punches as they crap all over Emos, Indies, New York and women in general. I’m sure some of these lyrics will offend, but isn’t that the entire point?

“Fortune and fame are gonna pass me by, but I got one night to give you and it’s gonna fly” sums up the ethos of many sleaze rock bands. Bands that are too offensive for the mainstream, so instead they find their niche playing for a small group of rabid fans. The Deadly Romantics are one of those bands…Zodiac Mindwarp (who is thanked in the liner notes) would be proud!