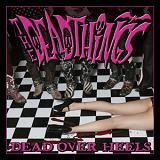 Review:
Is being “Australia’s No.1 Glam Band” really that big of deal? Are there lots of glam bands swimming around Australia’s musical underground? I’m not sure, but The Deadthings claim to be the cream of the crop.

The Deadthings play Sunset Strip glam (and have the outrageous look to match), falling somewhere between the party atmosphere of Poison and the unpredictability of Tigertailz. The band sounds great, but what will ruin things for the listener are the vocals – it will be a case of loving them or hating them. All too often vocalist Julez C Mephisto whines his way through the songs in much the same way several of the lesser known early 90s glam bands did. I never could get into that type of delivery and The Deadthings are no exception.

It is too bad, because musically I like most of the songs on Dead Over Heels. The band has a hint of evil to their music, it isn’t all safe and smiley, plus there are some great guitar licks contained here. Because of that some of the songs work exceptionally well, like the cover of “Send Me An Angel”, “Sister Suicide” and “Devil With An Angel’s Kiss”, which is glam personified. The rest of the disc I find average simply because I am having trouble getting into the vocals.

I know there are still lots of glam fans out there, and those people will enjoy The Deadthings. Personally I was never able to get into glam metal like this, even 20 years ago. I don’t hate this CD by any means, and like the fact that they add some horror to their music, but I have always leaned more towards no-frills rock myself.