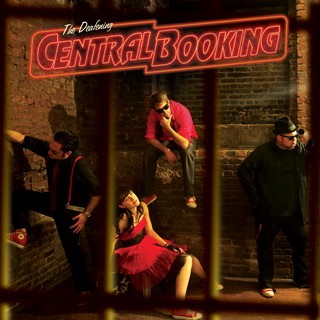 Review:
If you’re listening to a song by this new band you might first think you’re hearing Liv Jagrell from Sister Sin or Lzzy Hale from Halestorm — but no, this is a different animal entirely. There’s a new kid on the block… enter The Deafening, a full frontal auditory assault from the gritty side of New York City. Lead vocalist Lena Hall commands absolute attention with her powerful pipes and guitarist Burt Rock covers many different styles and can hold his own with the best guitar Gods — past or present. These aspects, combined with an earth shaking pounding rhythm section of Dylan Doyle on bass and Mick Harrison on the skins, gives the listener the epitome of a hard rock experience.

Central Booking is night time party music. There’s a raw in-your-face aggression to this, and a danger with just enough tongue-in-cheek to make it so much fun. It’s tough to pin the band’s sound on any one influence or particular source, this is sleazy fun gutter rock with an element of horror. You might recreate The Deafening if you had a big pot stirred up with some northeastern United States sonic ingredients that included the likes of a Skid Row, some Spread Eagle, a heavy sprinkle of old NYC-rooted Smashed Gladys sleaze, throw in some devilish theatrical elements of Rob Zombie and Alice Cooper, and a swagger of a punk rock Sex Pistols‘ attitude.

Most of the tracks are straight ahead fun rockers but there is also some diversity throughout Central Booking. Songs like “You Will Remember The Dead”, “Death Rattle N’ Roll” (which the band released an Exorcist-spoof video for) and “Evil Kiss” provide the campy horror themes. From some others you can’t help but get a feeling that it would do Quentin Tarantino proud to throw them in an upcoming movie soundtrack. The intro to “I’m So Bad” starts off with Rock strumming a slow rockabilly riff alongside Hall‘s hushed vocals before it rips into another bluesy hard rocker. The band mixes things up again with “Jesse”, starting off with a needle in the groove sound that picks up all the static you’d hear from an old vinyl record and features only Hall alongside the guitar plucking Rock. “Twist” starts off with a sultry jazz like intro, until again, the band breaks into another in-your-face pummeling of shrieking vocals and mighty riffs.

I would expect a somewhat theatrical live show from The Deafening, but high energy is a guarantee. The guys in the band have an image that’s not quite generic but also not over-the-top ‘rock star’ either, singer Lena Hall however looks more like a bad-assed rock ‘n’ roll Katy Perry with long dark hair and flare dresses combined with a leather jacket and converse sneakers. The Deafening has passion you can taste through their sound alone — even if a label doesn’t take a chance on them I know this band will make a serious dent in the hard rock scene in 2013.