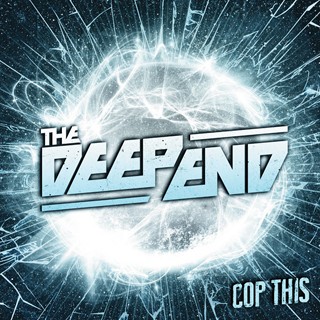 Production:
Recorded and mixed by Matt D’Arcy and Tim Smyth.

Review:
When Airbourne exploded onto worldwide radio in 2008 it was only a matter of time before young bands hungry for success would embrace a similar sound. The latest group to enter this increasingly crowded field are fellow Australians The Deep End.

The gauntlet is thrown down on Cop This‘ first single, and opening track, where The Deep End convincingly claim to be ‘bigger, better, badder than the rest.’ Based on this song alone it’s hard to argue with these Aussies as they power through four minutes of head-banging hard rock that could rival any band spewing out AC/DC inspired attitude. From there The Deep End barrels through high adrenaline rockers like “Get On It”, “Knife Fight”, The Hangmen reminiscent “Cheap Night Out” and “Tattoos” without missing a beat. Rivaling the lead-off single, and maybe even surpassing it, is “Shit Talker” — the type of song Dirty Looks reached cult status with during their Cool From The Wire days. Flailing hair, mighty guitar riffs, a steady backbone and vocals descended from hard rock royalty is what you will find in spades during Cop This.

There are countless bands playing this type of super-charged rock music these days, but after a mere ten songs The Deep End are clearly clawing their way to the top. The chances of reaching the same level of success as fellow countrymen Airbourne are stacked against them (and all other upstarts), but I can already picture The Deep End opening for them and gaining some loyal and rabid fans in the process.

Australia pretty much has a stranglehold on this type of music, from AC/DC and Rose Tattoo through to Airbourne… and now The Deep End. These five rockers undeniably live up to the high standards set by those before them on their debut album – a CD overflowing with fist-pumping attitude.