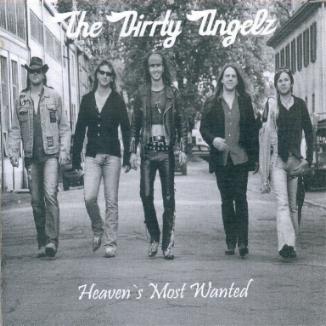 Review:
A hair metal fan always knows he/she is in for a treat when the band name contains several doubled-up letters and excessive use of the letter ‘z’, and Germany’s The Dirrty Angelz fit that criteria. The band bounces back and forth between 70s retro rock and a sound very reminiscent of classic Rhino Bucket. Being the AC/DC clone band fanatic that I am, I prefer the tunes where the group lays down some nice sleazy rock.

“Back For More” is one of those boot-stompin’ shit-kickin’ songs that send a shiver down your spine. If the upcoming Rhino Bucket release sounds half this good I will be happy. “Dirrty Kings ‘N Beauty Queens” and “Hey Soul Sister” (this is another incredible tune) follow in that same vein with great results.

Most of the other tunes fall into 70s territory and songs like “Hot An’ Ready” remind me of Bob Dylan performing hair metal, it is unique. I can’t help but like the guitar oriented songs like “Should Have Known Better” with its simple yet effective chorus. The Dirrty Angelz do slow things down occasionally, but instead of boring ballads, they lean more into acoustically charged territory.

I gotta say I like these guys. They offer up enough of the usual to keep me happy and also keep things original at the same time. Plus their tempo changes are a nice relief and it seems to make the faster numbers rock even harder. Check them out.