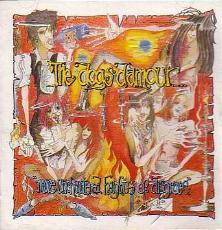 Production:
Produced by Al Scott and The Dogs D’amour.

Review:
Has there been a hard rock band like The Dogs D’amour in recent years? A group that has been largely ignored by the record buying public yet has managed to secure a dedicated cult following and a history shrouded in decadent folklore. The album title alone, More Uncharted Heights Of Disgrace, only helps fuel the legend of The Dogs and more appropriately vocalist Tyla.

For those that have never heard The Dogs D’amour before ignore the glam image and the famed stories of onstage debauchery. This band owes more to the bluesy balladeers of the 70s than anything released in the last couple decades. Tyla‘s voice is one of those things that has to be heard firsthand in order to understand its unconventional leanings.

There are several great tunes on this release, like “What’s Happening Here” and “Mr. Addiction”, but a couple really stand out. “Pretty, Pretty Once” is the type of melancholy song only Tyla and company could pull off. The lyrical delivery on this song seems to have no rhyme or reason yet every word fits like pieces of a puzzle and by the time the female chorus vocals kick-in your jaw should drop in amazement. “More Uncharted Heights Of Disgrace” aims for the same outstanding status but falls just a hair short.

Like every other Dogs D’amour album I have heard there really isn’t a song that rocks so hard that it kicks you in the nuts. But that isn’t The Dogs‘ style – as they prefer to use Tyla‘s whiskey soaked (and on the verge of cracking) voice to reach into your heart and guts for an emotional roller coaster ride. www.tylaonline.co.uk