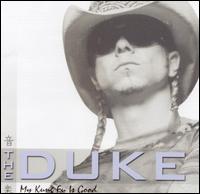 THE DUKE
MY KUNG FU IS GOOD
Released 2005 (Spitfire)

Review:
After making a name for himself in groups such as Stuck Mojo and Fozzy, guitarist/vocalist Rich Ward has taken on the alter ego of The Duke and made a sweeping left turn in musical direction. Simply put, this is Rich‘s attempt at being a contemporary singer/songwriter – and while the lyrics and compositions are heartfelt, I have to wonder if fans of his previous work will enjoy My Kung Fu Is Good. There is nothing heavy about this album at all, in fact it is incredibly mellow, in the same vein as Jack Russell‘s latest solo offering.

The Duke‘s vocal delivery reminds me of Anthony Kiedis on several songs, most notably on “Immune”. “Used To Be” is an honest piano-laced song that shows The Duke at his best, crying out that he misses “the way it used to be; when everything was beautiful”. I like the male/female harmonies of “Summer”, but the song itself I found rather boring. “Show You The Way” gets things back on the right track, as it becomes obvious that The Duke‘s music comes across more powerful when he speeds things up a little.

“Back To You” has commercial appeal written all over it with the high-pitched chorus, up-tempo backing vocal sounds and pop oriented melody.

I just can’t picture Fozzy fans enjoying this, it would be like switching from metal to Top 40 radio with a quick turn of the dial as The Duke has based these songs around the piano as much as the guitar. Personally I prefer music with some balls, but if you enjoy experimental AOR My Kung Fu Is Good may be up your alley. One could say this album is a spiritual journey for Rich Ward, one he had to take using a pseudonym in order to separate himself from his heavier previous works. If you feel like taking this mellow journey with The Duke head over to his official website at www.dukerocks.com.