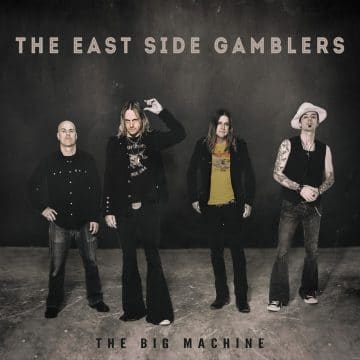 THE EAST SIDE GAMBLERS
THE BIG MACHINE
Released on July 7, 2018 (The East Side Gamblers)

Review:
You never know what you’re going to get when a band member from a famous artist’s solo band branches out with its own group. What will the solo band member sound like free from the shackles of playing the famous artist’s catalog of songs — with a sprinkling of solo tunes — night after night? That is indeed the question that came across my mind when I learned that Tom Keifer solo band lead guitarist Tony Higbee had his own group titled The East Side Gamblers. I never really pictured Higbee as a frontman given that he has been playing second fiddle to Keifer for what seems like an eternity (in fact only five years or so) but in hindsight, it makes sense as he did have good presence during the various times that I saw Keifer play with his solo band and the guitarist does have a tall blond lanky frame with some good looks to boot.

It’s also a good marketing ploy or timing as Higbee and The East Side Gamblers can capitalize on the former’s affiliation with Keifer to get some publicity right off the bat and get their foot in the door so to speak. After all, any band member affiliated with Cinderella frontman Tom Keifer will at the very least get a listening “audition” from Sleaze Roxx simply out of interest for all things Keifer. So I was quite interested to hear what Higbee‘s band would sound like. I’ve got to say that I didn’t expect such a heavy album from The East Side Gamblers. There’s definitely a story behind that name that I hope to find out sooner rather than later. I also didn’t expect such a raspy and down n’ dirty voice from Higbee. Wow! What a great voice the man possesses! Finally, I didn’t expect to be sucked in right away from the first note that I heard from The East Side Gamblers. As soon as I heard the opening guitar riff from The East Side Gamblers‘ “The Getaway” track, these guys had my attention all the way through and I quickly posted “The Getaway” video as Sleaze Roxx‘s “featured video” on the website’s Home page.

Mixing some debut album era Kingdom Come groove with some classic rock, the music played by The East Side Gamblers is simply stupendous. The whole group consisting of Higbee and Josh Dutoit sharing lead guitar duties, bassist Cody Higbee (presumably Tony Higbee‘s brother based on the last name and resemblance looks wise) and drummer Chris Brewer sounds really tight. I particularly like the guitar harmonies that pop up from time to time which give a cool ’80s feel to the more modern classic guitar sound that is prevalent throughout most of the album. The first two tracks “Welcome To The Big Machine” and “The Getaway” have a lot of similarities with Higbee‘s vocals singled out during the verses with mesmerizing guitar riffs in between. Although you might think that the two songs have that one dimensional but cool feel that Kingdom Come‘s sublime track “Get It On” possesses, both songs and particularly “Welcome To The Big Machine” has quite a few different tempos to it including the aforementioned guitar harmonies towards the end.

“High Time” and “I Ain’t A Ghost Yet” are two other solid rockers that follow the same path as the first two but are a tad below in terms of overall quality. For example, a little more melody during the verses on “High Time” with less basic drumming would have likely lifted the song to that next level as the chorus is a catchy one and the guitar solo is fantastic and reminds me of classic Ace Frehley. The one disappointing track on The Big Machine is the album closer “Eye For An Eye” which chorus portion is just too slow paced and particularly compared to the first four tracks. It just feels that the chorus portion could have been so much better. The guitar harmonies towards the end of the song are a nice touch though.

Overall, The East Side Gamblers have come up with a very good album. Had they only included the first four songs, I’d have to consider the EP as a contender for the Sleaze Roxx’s Top Ten Albums of 2018 but that last track just doesn’t sit well with me and you gotta take an album as a whole when considering what could be one of the top albums of the year. I’m excited to hear more from The East Side Gamblers and really hope that they start playing some shows outside of the Nashville, Tennessee area because I have a feeling that they would put on one heck of a live show with such great songs to choose from!