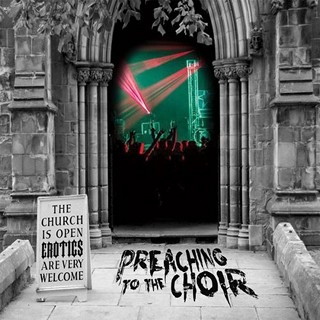 THE EROTICS
PREACHING TO THE CHOIR
Released April 15, 2014 (Find Your Fangs Records)

Production:
Produced by Don Fury and The Erotics.

Review:
Over two decades of slugging it out in the music industry in relative obscurity is either dedication or complete insanity. For Mike Trash it is likely a bit of both, as his current project The Erotics released their debut way back in 1997 and have since evolved from punk influenced rockers to sleazy gutter dwellers. You could say The Erotics sound like Wednesday 13, without painting themselves into a silly horror themed corner, or an over-the-top and out-of-control Alice Cooper meets the Ramones.

Having been on the scene for such a long time now, Trash and company have lots of material for a live greatest hits collection. At eighteen songs Preaching To The Choir likely contains something for every fan of the band, and more than enough material for the casual listener. Recorded in front of an audience in a New York studio, this collection promises ‘no over-dubs or re-recording’ — so you know right away its going to be rough around the edges. Being ‘rough’ seems to fit The Erotics however, a band that appears and sounds as filthy as their stage name would suggest. Eighteen bursts of furiosity, punctuated with Trash‘s screams and ‘singing’, give the listener a sense that The Erotics were all over the audience on this evening.

At times it is a little too much to take (even bordering on silly), but at their best The Erotics are damn good sleaze merchants. By the time “Rock N Roll Killing Machine” comes around the trio are firing on all cylinders and showcase their prowess on the dark “She Sucks The Life”, “Today The Devil, Tomorrow The World”, the chugging “Blast Off” (which should have been the show opener) and the oddly catchy “Baby Rock Out”. The last half of the album drifts deeper into punk territory however and I found myself starting to tune out by the time “W.C.F.O.T.D.A.R” rolled around, with only a cover of AC/DC‘s “Walk All Over You” grabbing my attention (although the background vocalist during the chorus needs some singing lessons). Closing out the disc is a bonus studio cut called “Last Of The Rock N Roll Motherfuckers”, which shows The Erotics are still masters of angst ridden sleaze anthems.

Preaching To The Choir does exactly what its title suggests as the band’s established fan base will eat this album up — however The Erotics may be a bit too simplified and juvenile for some listeners, and the rawness of this recording won’t convert any fence-sitters. However this album does display why The Erotics have managed to remain on the hard rock scene for such an extended period of time — although at eighteen tracks they almost overstay their welcome.