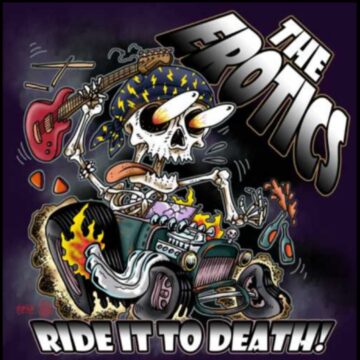 THE EROTICS
RIDE IT TO DEATH EP
To be released on September 27, 2021 (The Erotics)

Review:
Albany’s perennial shock rockers The Erotics are back with a five-track EP follow up to 2020’s Let’s Kill Rock N Roll as a probable taster for their next full album. After a 20 plus year career that spans nine albums, numerous EP’s, compilations and hundreds of sweat soaked live appearances, they certainly show no signs of slowing down which is more than good news.

“When The Wolves Are Howlin’” kicks off this latest release in fine, dirty style. It’s slightly eerie but with a fun, instant chorus that will no doubt become a staple in their already overflowing live set list and rightly so. There is also a worthy case to submit that it would add suitably seedy class to any horror comedy soundtrack. The same could easily be said of “Scream Like A Demon” where Johnny Riott’s drums, Doug Reynolds’ guitar and Tony Culligan’s bass perfectly compliment Mike Trash’s glorious , broken glass vocals. Title track “Ride It To Death” is firmly tongue-in-cheek encompassing their slightly punkier side and wouldn’t be out of place on any American Dog album.

The pace slows ever so slightly with the sardonic anti-ballad “Bless Your Heart” in which the band turn on their “in the dynamite Jet Saloon”” era Dogs D’Amour perfectly with Mike Trash sounding more like Tyla than ever and making me love the song even more just because of that. I’ve always regarded The Erotics as that band’s American counterparts and I do feel this track ultimately proves my point. The insistently threatening “Can I Sit Next To You” is a perfect closing track, proving that they are not a bunch of guys you would want to sit and share your late night Jack Daniels with. The bass throbs, the guitars are in full shambolic sleaze mode and Trash’s vocals laced with menace delivery that would scare the hardest of resolves.

My only criticism is that it’s too short. Five tracks is nowhere near enough but I am reassured in the knowledge that it hopefully won’t be too long before the 10th full album is upon us judging by the quality of this release. In an uncertain world, The Erotics never fail to raise a trashy smile — which can only be a good thing — and this smartly produced, gloriously grubby EP is further proof of that fact.

The Erotics performing “Scream Like A Demon” live at The Strand Theatre in Hudson Falls, New York, USA on February 26, 2021: