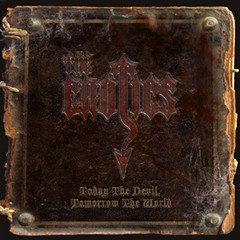 Review:
When someone listens to “Blast Off”, the first track on Today The Devil, Tomorrow the World, the first thing that they’re going to hear is a punkier version of the Murderdolls — which isn’t necessarily a bad thing. It proves that while some bands sing about the same thing repeatedly, other groups are capable of making the songs sound different from each other. That’s the main thing The Erotics deliver, because unlike the Murderdolls, they use different riffs and bring about different aspects in the subject matter.

The biggest example of this can be found on “She Sucks The Life” where during the crescendo The Erotics are able to sound like an up-start punk band (despite Today The Devil, Tomorrow the World being their 7th release) rather than some jokey gimmick. Another thing that’s interesting about this album is the low-fi production that’s audible on every track — the bass is brought up very high in the mix and it’s clear that producer Don Fury tried to give the band a tougher sound.

Listening to the lyrics of “19 Goin On Homicidal” (which has a good guitar solo) had me laughing out loud because it was as if The Erotics were plagiarizing from the Alice Cooper songbook, a formula that continued with the ‘ballad’ “I Feel Nothing” which sounds something like “Only My Heart Talkin'” — and who wants a rip-off of that?

The best song on the CD is the title track where The Erotics are actually willing to try something new — downbeat vocals and a swinging riff carry the song throughout, as well as an interesting breakdown that you wouldn’t expect to hear from a band like this. But then the trio turn around and make a completely juvenile song like “Anything”, with its chorus of ‘I’ll fuck anything, anything, just to fuck you.” Come on guys, really? “Baby Goes Bang” and “Hogtied & Waiting” bring you back to the hair metal days of W.A.S.P. and ahh… the glory of those days!

It’s clear that The Erotics are admirers of the ’80s metal sound, but they need to learn some new tricks in order to differentiate themselves from the rest of the pack. Or could it be that after all these years the pack has finally caught up to The Erotics?

Reviewed by Pete Crigler — author of Keeping It Tight In The Old Dominion — for Sleaze Roxx, January 2011