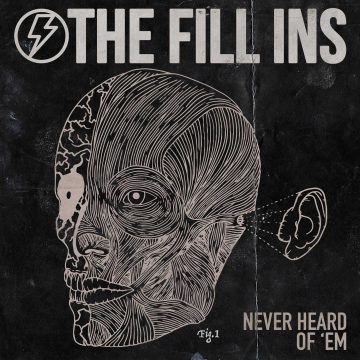 Review:
Never Heard of ‘Em is the fourth full album from Charlotte, North Carolina based The Fill Ins. They can best be described as a gravelly voiced good-time party band with some talent. Kind of a neat balance between punk and hair, or like Thin Lizzy meets L.A. Guns, if that makes any sense. The band performs heavily throughout their native North Carolina and surrounding states, and expect to broaden their reach with the release of their new album. So they should. The band’s name and the album title was drawn from the same experiences many bands have had… “We weren’t rough enough for the punks, we were too mild for metal heads, and there just weren’t a lot of “rock” bands when we were starting out around here.”  … so they “filled  in.”

Lead off track “Dangerous” takes me back to a decade ago — Helix, Last Vegas or maybe Jackyl, A heavy guitar influence drives the entire song narrative. “Long Way To Go” is a gritty, working man type bar track akin to American Dog. I know that reference is getting stale, so how about Hardbone? Actually much of Never Heard of ‘Em could be described that way, with the best of intentions. “Dramatic” pops from the beginning, with a decent guitar intro that morphs into a realistic verse before exploding during the chorus. Alex’s vocals mix perfectly with the band’s overall sound. There’s more than a hint of Danko Jones on “Return To Sender”, a Canadian band that is a heavy influence on this album. Mikey Black developed the main riff on this track with lyrics and other writing by Alex Stiff and Captain Nunn.

In fact, singer Alex Stiff told me, “We all come from different musical backgrounds and try to implement different elements of “rock” to the songwriting. I’m a bit more of a classic rock and punk guy, where as Mikey [Black] is into more metal and hardcore music, and Cap [bassist Captain Nunn] has some southern soul to his writing. Bands like KISS, Supersuckers, Danko Jones and Sweet really helped inspire this record.” That kind of genre potpourri leads to a very cool vibe with “Personally.” The open guitars and rhythm section create a loose flowing track with a Thin Lizzy vibe. Comparatively, I’d link “Thinkin’ About You” with something more gritty and dirty, more back into Danko Jones territory. “Drown Your Blues” is a bit down tempo, but the guitar / vocal work is complimentary and with the accompanying bass/drums, works out to a pretty good listen. The lyrics do tell the story of a travellin’ band.

It’s funny to hear that this album came about as a result of “living room jam sessions” when the band was between drummers, with the singer playing “lap drums” while writing. As a drummer myself, I can’t help but feel somewhat offended by this! Anyway, this is the first time I’ve come across The Fill Ins, despite them being four albums deep in their career, forming back in 2010. It seems clear to me that over the last decade, the band has evolved into a group that is worth keeping an eye on. A special thank you to Alex Stiff for the background information and the online chat keeping us busy during this whole Covid-19 thing. Stay safe everyone!

Lead single off the new record from Hobo Wolfman Records; featuring Jeff Clayton of ANTiSEEN on guest vocals.Pre-order the vinyl LP on 10/11 – linkt.ee/thefi…