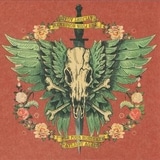 Review:
When The Four Horsemen disintegrated in 1992 the band was in a tight spot. Enigmatic singer Frank C. Starr was out of the picture, and how would they be able to replace his sneering-swagger? Rather than search for a direct Starr copycat, guitarist Haggis took a different approach and eventually recruited Tim Beattie, a harmonica playing soul singer.

Beattie wasn’t entirely foreign to The Four Horsemen camp as he did some session work with the group during Nobody Said It Was Easy. What was foreign to the band was the evolving sound they created with their new vocalist. Gone was the AC/DC ‘fuck you’ leanings of past which instead was replaced by mellow Black Crowes influenced roots rock. It was a huge departure for The Four Horsemen, and one that fans of the Frank C. Starr era may have trouble swallowing. But here it is, for better or worse, some fifteen years after being recorded – Daylight Again.

It wouldn’t be fair to compare this CD to the classic Horsemen sound, because aside from some of the guitar riffing it is a completely different band, sound and beast. To appreciate these long lost recordings you’ll have to rid yourself of any preconceived notions you had about The Four Horsemen. The raunchy attitude of their early works has been replaced by the southern harmonies of the Allman Brothers, The Black Crowes or even the Robert Mason fronted Cry Of Love. The slide guitar of Haggis is still present, as are Dave Lizmi‘s irresistible leads, but added are harmonicas and banjos.

Even though I have trouble calling this a Four Horsemen album, you can’t help but like the moody tempo the guys set during “The Bed Went Cold”, or the way “Amazing Grace: Reprise” evolves into an 11 plus minute of guitar shredding. Listening to those two songs alone you get the feeling that these recordings represent Dave Lizmi‘s shining moment, as he completely explodes on both. The more I listen to this, the more I am convinced that these songs were the seeds for what would later become tracks such as “What The Hell Went Wrong” and “Song For Absent Friends” from their 1996 release.

If this review leaves you leery about picking this CD up, you can at least go to the band’s website and grab the 21st Anniversary reissues of Welfare Boogie and Nobody Said It Was Easy, complete with bonus tracks. A quote by Haggis in the liner notes sums up Daylight Again better than I ever could, ‘We started out as card-carrying members of the Bon Scott fan club, and ended-up sounding like the house band at an Arkansas chicken ranch.’