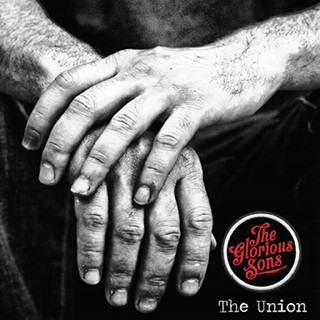 Review:
This is one record that I knew I would like at least half the songs on before even purchasing it. The reason of course is that I bought The Glorious Sons‘ The Union debut, along with their Shapeless Art EP, immediately after seeing the band open for Airbourne a month ago. This band clearly fits into the proverbial adage of “don’t judge a book by its cover” because had I simply judged them on their appearance — quite a few scruffy beards, a barefoot muscled clean cut guitarist, seven members onstage including a keyboardist and a back-up female singer — I would have concluded that the sound emanating from the Canadian band would have been a potpourri of instruments and noise reminiscent of the pre-KISS incarnation known as Wicked Lester. Clearly, this was not the case as The Glorious Sons quickly proved when I saw them play live and now while listening to The Union.

The questions that remained in my mind for this review were whether The Glorious Sons could translate their live sound onto a studio record and whether I would like the rest of the songs that I had yet to hear. The answer to both questions is a resounding “yes”.

The Union starts off fairly slowly with the bluesy “Man Made Man”, but surprisingly I enjoy it. The main reason is that lead vocalist Brett Emmons‘ delivery occasionally reminds me of the haunting and captivating vocals performed by Glenn Danzig during the classic “Mother” (the only song that I know from the darker occult based band) — although the similarities end there because The Glorious Sons‘ music is upbeat and their messages are down to earth. Brett Emmons, who is not to be confused with older sibling and bandmate Jay Emmons, sucks you in with his voice and keeps you interested through the opening song and frankly the entire record. By the time the younger Emmons brother starts singing the second song “Heavy” — which is one of the best and most rocking tracks on the record — I am taken hook, line and sinker. “Heavy” is built on a guitar riff which is complemented at times by tons of other instruments and at other times simply by Brett Emmons‘ voice. The song will bring you to a climax multiple times and is damn good!

Although The Glorious Sons play a brand of music that I would not have necessarily gravitated to on my own, or via my usual music channels, I am very happy that I got to see the band play live as I surprisingly enjoy all of the diverse songs on The Union. Everything from the background vocals, the at times big upbeat sound, and the band’s ability to speed up and then slow down their songs, all highlighted by Brett Emmons‘ captivating vocal delivery makes every song a special one. My favorite songs on The Union remain the three fastest and heaviest ones — “Heavy”, “White Noise” and “The Union” — but following closely behind are “Mama”, the easy to sing along to and breakthrough single “The Contender” (which showcases all of the band’s qualities), and the beautiful piano based “Amigo”. Along with “Amigo” I even enjoyed the other two slower tracks “Gordie” and “Lover Under Fire”, which border between ballad and pop territory. Those of you who have read some of my prior reviews will know that ballads are often a sore point with me, but The Glorious Sons even pass that hurdle. The Union is the kind of brilliant yet diverse record that Alice Cooper could have come up with.

Have I gone soft? I have wondered that myself as I have been playing The Union time and time again ever since acquiring it. Or perhaps, and this is the more likely answer, The Glorious Sons have delivered in The Union a record that transcends musical genres and can be appreciated by fans of just about every rock genre due to its sheer brilliance.