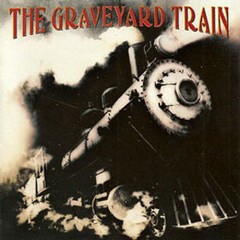 Review:
Upon the demise of Angora, singer John Corabi found success with The Scream and Motley Crue. His former Angora bandmates Frank Scimeca and Robert Iezzi formed The Graveyard Train, hooked up with legendary producer Tom Werman, released a killer debut that no one heard and quickly vanished.

A strange album to reissue, simply because no one paid attention when it was released, The Graveyard Train‘s one and only release now includes five bonus tracks and reinforces my opinion that this was always a criminally underrated album. With a blues driven sleaze sound, The Graveyard Train came across as both honest and sincere — resulting in the band appearing more mature than the majority of their peers. Even though they weren’t a hair metal band per say, with the long hair and ties to the ’80s metal scene no one was paying any attention when this CD got released in 1993.

You’ll be hard pressed to find an album that starts off in such consistent fashion, as the first six songs rival that of any group. “Down To The Wire” quietly shuffles along before it kicks into gear with some stomping blues rock during the chorus, and continues going back and forth like that throughout. “Hell On Wheels” finds the group following a more typical hard rock formula, but Todd Griffin‘s solid voice sets it apart. “Memphis #999” continues the trend and incorporates killer guitar and harmonica work into the mix, “Medicine Man” is an up-tempo acoustic/rock hybrid that shows yet another side to The Graveyard Train and “Graveyard Boogie” is a darker number that lives up to its title.

All of that happens during the first half of the CD — and the second half doesn’t let up! The odd ballad is thrown onto the second half, and some Black Crowes inspired numbers, but almost every track impresses. As for the bonus tracks, “Killing Time” completely rocks and contains a slight hint of R&B while “Manchild” could be a hard rock version of The Doors.

If you haven’t figured it out yet, I love this album — and always have. I don’t really understand the reasoning behind this reissue, but if turns a few people on to The Graveyard Train for the very first time it is totally worth it. I can’t decide who I like better, these guys or The Scream — all I know is that both of them kick ass.