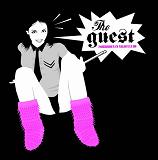 THE GUEST
FORBIDDEN IN NIGHTCLUBS
Released 2007 (The Guest)

Production:
Produced by The Guest.

Review:
Forbidden In Nightclubs is the first EP release from French band The Guest. Things start off with “The Entrance”, and what an awful entrance it is. I have to ask, what the fuck is this? And I’m hoping that whatever it is, it isn’t what the rest of this EP has in store.

The next number “What You Want” starts off promising with some rocking guitars and drums, but the whole thing crashes and burns when the singing kicks in, which is a shame because the music itself has potential to make a good song. If defunct band The Darkness ever had it right (debatable, but millions seem to think so), The Guest sound like The Darkness gone terribly wrong.

By the end of track three, “I Have Had My Fill”, I have to say I have just about had my fill of The Guest as well and I’m not even half way through Forbidden In Nightclubs yet! I can’t even describe the vocals on this. Again I have to ask a question – are they taking the piss? This has to be some kind of joke right? It’s so bad it’s actually funny. Unfortunately it doesn’t appear it is a joke at all because the rest of the EP doesn’t get any better.

They have the same odd vocal thing going on with “And The Blast Forever”, and this song is nearly a torturous ear-bleeding five minutes long! Whatever it is they are trying to do I have no idea, like I said I can’t really describe it – it goes from almost normal singing, to bursts of guttural noise and alternates between these and high-pitched squawking. To be honest, I don’t know what the hell is going on but it just doesn’t work. Moving along, ever hopeful, to “The Best Driver”, but alas this is pretty much as unbearable as the rest before it and the others that follow.

This hasn’t been easy listening. The final song “Exit” is, luckily, as short as the first track “Entrance”, and it’s with relief that it is over and out and off with this disc. It’s like the guest who visits, stays too long and you can’t wait for them to leave. If anything should be ‘Forbidden in Nightclubs’ The Guest are possibly it.