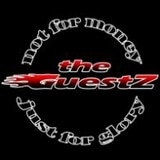 Production:
Produced by The Guestz.

Review:
Once again I’ve been sent a promo CD and this time all the way from Italy. The band is called The Guestz and they were formed in Rome in 2006 and consist of Mimmo Good (vocals), Jonna (Guitar), Rob ‘n’ Roll (Bass) and Matt Svarione (drums). The band began by playing cover songs of bands like AC/DC, Motorhead, The Cult and Buckcherry.

Before they had even found a name for the band they had gotten a gig opening for the German band Soul Doctor and on the poster it simply said ‘guests’. Since the guys didn’t have a better idea for a name they called themselves The Guestz. In order not to have the same name as another group they put a Z in the end of their name. In early 2008, after several jobs, the band began working on their own songs which resulted in Not For Money, Just For Glory.

There are five songs on this CD and it starts out with full power on “Jonna Wants Two Beers”. This is a very good opening song and my first thought was, if the CD continues this way, it can only turn out good. The next track “Piracy” has a good guitar solo, but the rest of the song is a bit boring and monotonous. “House Of Rock” is the next song and here they are back with full on power. It is a song about the rock ‘n’ roll life and it could easily be the band’s rock anthem. The track is built up really well and it has a really great chorus. Up next is “Naked Alice”, which is the fastest song on Not For Money, Just For Glory, as it is inspired by AC/DC and mixed with a ‘hair metal’ chorus in the style of Poison. The final cut, “In The Blink Of An Eye”, is even more inspired by AC/DC as Angus Young could have written the main riff.

With The Guestz you get a really good mix of rock and sleaze. You can hear that they find their inspiration in the bands mentioned above (those that they originally covered in their formative years). Not that it is bad thing, but it has been heard before. The band plays very well and Mimmo God‘s voice fits well with the style of music. The band produced Not for Money, Just for Glory themselves and they did a great job, but it would be cool to hear a full-length CD that is even better produced.