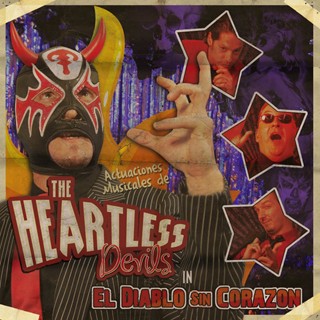 Review:
Music can be a strange thing — one minute I’m reviewing Grimm Jack‘s return single, and the next I’m spinning their former guitar player Scott Bittner‘s new project The Heartless Devils. The timing of these two releases was impeccable, but the bands are very different beasts. The Heartless Devils have been in the building stages for a few years now, evolving from the Strip Club Devils which featured The Throbs‘ Sweetheart on vocals.

Bittner, who also played guitar in Mr. Nasty, handles vocals on this release, and while he doesn’t have the sleazy sound of his former bands or the dark sinister side of Sweetheart, his voice is perfectly suited for The Heartless Devils‘ brand of power-pop with punk undertones. Essentially this twelve song debut is driven by a simplistic approach with inoffensive songs that even your significant other could get into — basically El Diablo Sin Corazon is fun, catchy and straight-forward rock music.

The Heartless Devils hit their stride during “Bad Luck Charm”, a song that would feel at home on any of the underrated albums by California rockers The Hangmen. Then comes “Hold On”, a track that I was spinning while driving home from work the other night — of course I was daydreaming and paying little attention, until I found myself singing along to the chorus. I had to spin the song a few more times just to make sure I wasn’t dreaming, but I ended up getting so caught up with its catchy pop-rock overtones that I proceeded to miss my turn-off! Oh well, that just bought me a few extra minutes to play the song another handful of times.

This entire CD is like that, the songs seem to sneak up on you — one minute I’d be thinking what kind of bubblegum-pop drivel is this, and the next I’d be belting out a chorus along with the band. Whether it is “Blame You”, “Hit And Run”, “Heartless” or “Little Something”, the harmonies supplied by this trio are meticulously placed in all the right spots — not unlike the magic that the legendary Cheap Trick often create, although I’m sure Bittner will be the first to acknowledge that he doesn’t have the range of someone like Robin Zander.

I realize that not everyone will enjoy El Diablo Sin Corazon, although if you like power-pop and mindless fun The Heartless Devils would be worth checking out — but if you’re looking for something heavy or sleazy you’d be best to go elsewhere. Too safe for the punks and too soft for the headbangers, The Heartless Devils may have trouble finding an audience yet have cross-over appeal written all over them — the biggest difficulty will be finding the band’s most appealing market.