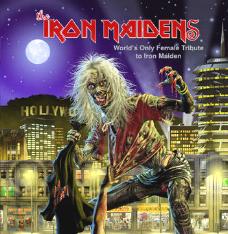 Review:
With Iron Maiden being all over the news lately thanks to Sharon Osbourne turning Ozzfest into Bitchfest, it seems only fitting that this disc dropped onto my desk. Tribute bands are a dime-a-dozen these days (just walk into any rock club for proof), but very few actually release their own albums. And very few tackle music sung by the opposite sex – can you imagine some balding pot-bellied slob belting out Joan Jett hits? I can’t.

However The Iron Maidens are a group of professional musicians (some of whom toiled in Phantom Blue) that play Maiden classics, staying true to the originals while adding a female twist. It wasn’t that many years ago that females in metal was as common as herpes on a nun, but those days are long gone. And if anyone claims chicks can’t rock, simply throw on this CD and skip straight to “Run To The Hills”. Linda McDonald smashes the living shit out of her drumset on this tune while the remaining members follow suit, completely nailing this classic number.

In fact The Iron Maidens are perfect on almost all the songs they cover, ranging from the typical Maiden hits to some known tracks like “Children Of The Damned” and “Killers”. The only cover that left me cold was “Aces High”, it just didn’t seem to have the energy of the original, but the aforementioned “Run To The Hills” as well as “The Trooper” and “Phantom Of The Opera” make up for that one miscalculation.

Are The Iron Maidens better then the real Maiden? Of course not, and they don’t even pretend to be. But these ladies do a damn fine job, and even beat Maiden at their own game in a couple areas. One, the artwork by Derek Riggs is better then any recent Maiden artwork (although I’m not sure if I needed to see an Eddie with breasts), and two, these gals look a hell of a lot better in tight leather. Up the Irons at www.theironmaidens.com!