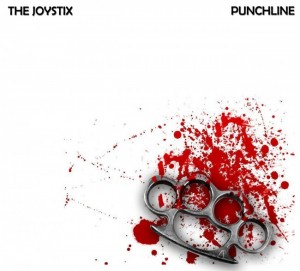 Review:
I have to say “thank you” to whomever sent me The Joystix‘s Punchline album because it’s quite a good record from start to finish. Unfortunately, I don’t recall who sent me the Punchline album, A while back, I received a CD — I forget which one — that I had agreed to review beforehand. Inside the package was another CD from a band that I had never heard of called The Joystix. The Punchline CD sat on my office desk for at least a few weeks before I finally opened up the package. My first thoughts were that the band members originate from an eastern European country based on their names and their look seemed quite “alternative” making me wary of listening to the album in the first place. Nevertheless, I put the CD on for a spin and was impressed right from the start and still to this day after many many more spins.

As it turns out, Hungary based The Joystix have been playing their brand of sleazy filled punk rock n’ roll for more than a decade having started out in 2005. What makes Punchline such a good album is that the songs are really catchy and melodic yet raunchy, sleazy and with a sizeable amount of attitude. While the songs on Punchline are simple, they don’t feel “too” simple such as what can be found from punk rock n’ rollers such as Sum 41 and Green Day. The Joystix count a number of classic punk rock n’ rollers as favorites such as Warrior Soul, Wildhearts, the New York Dolls, The Stooges, Dead Boys and the Ramones — all bands that I am either not really familiar with, or familiar and appreciative but which I never fully explored. Comparisons have been made of The Joystix to the Backyard Babies but I have always found that latter band to be a bit hit or miss while just about all the songs on The Joystix are quite good or at the very least fit together nicely as a whole.

My favorite tracks are “Born Under A Bad Sign” with its Motörhead like start and quick pace, “Back In The Saddle” with its easily memorable chorus, “No Friends” with its cool guitar riff and “Fametrain.” Even songs that I would usually consider to be “filler” stuff such as the aptly named “Dumb Ass Blues” end up being quite enjoyable yet and is the kind of off the beaten path track that greats such as Van Halen would throw in on an album back in their heyday. There are certain songs that are probably a little too commercial and pop infused for my taste such as “In My Head” and “Feel Feel Feel” but they are so catchy that I find myself enjoying them in any case. Even the closing track “Golden Days” with its piano and stylistic differences ends up working rather well although it is definitely the low point of the album. While all the songs are enjoyable on Punchline, the first five tracks seem to be a bit stronger overall than the rest.

I am glad that I gave The Joystix a chance because they are definitely the surprise of the year so far and I am even more pleased that someone — whomever that is — sent me Punchline to listen to because it’s quite simply a solid album. It’s not the type of music that I might usually gravitate to but I got to give credit where credit is due and The Joystix have come up with an album that can transcend quite a few musical genres including the sleaze hungry faithful readers at Sleaze Roxx. Paraphrasing what the immortal Lemmy Kilmister once said about Twisted Sister to a hostile UK crowd, “These are friends of mine from Hungary. Give ’em a listen. The Joystix.”

The joystix videoclip from the album Punchline. Directed by Bence Gulyas (bencegulyas89@gmail.com)