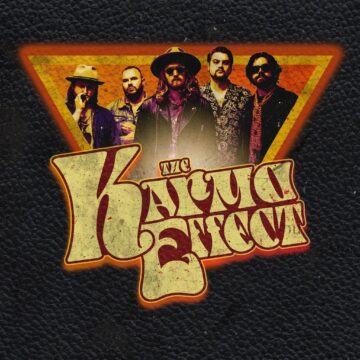 Review:
This London based quintet who has never known life as a band outside the pandemic, having begun during the first lockdown of 2020 by a group of friends as a response to the enforced situation, were then signed sight unseen by TMR and now – bolstered by a handful of allowed live appearances – their self-titled debut hits the shelves running.

Current single “Steal Your Heart” kicks off proceedings and immediately sets their stall out in delivering an Aerosmith-like  swaggering stomp that certainly gets this particular party started in style. The Black Crowes-esque funky flavoured “Doubt She’s Coming Back” fully utilizes the fine rhythm section of Liam Quinn on bass and Ash Powell’s drums and really should be destined to become a live favourite. “Mercy” follows in quality fashion in all its Bad Company glory, before “Stand” begins with a Faces type twinkling intro and then transforms into a gospel infused powerhouse of a song complete with fine Scott Emmins keyboards and a glorious vocal from singer Henry Gottelier.

By now, we’re well aware of the territory we’re in with the band and their throwback to the classic rock arena style ’70s, with just a twist of modern effect, and this is further exemplified by the storming bluesy “Wrong Again” which to my mind certainly ought to be the next radio ready single. Both “The River” and especially “Testify” benefit from early Extreme funk touches, before “Save Me” closes the show with the almost obligatory lighter waving ballad  that features yet another fine Gottelier vocal performance.

Whilst the band wear their influences proudly, they are far from simply travelling down a well-trodden path and their songs have the distinction of drawing on those influences, retaining the atmosphere whilst still making them their own. It’s a fine line but they don’t cross or exceed it at all and that is in itself something to be admired.

The Karma Effect are a tight unit throughout; with Robbie Blake’s guitar adding subtle nuances without the need to be  showy or provide us with unnecessary lengthy solos, and Gottelier is in impressive vocal form on every song. The production is crisp and clear even allowing for the fact that a lot of it was done online, it has a lot more clarity than many I’ve heard of late and definitely allows the songs to showcase themselves.

Their press release states that they ”draw upon the best of yester-year” and it’s bloody hard to argue with that fact. On this evidence, The Karma Effect should be huge and are far more deserving than some of those bands that already are!