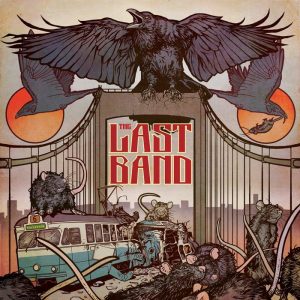 Review:
In the infamous words of the immortal duo Ren & Stimpy, ‘Happy Happy Joy Joy.’ This was my immediate reaction when I opened the post box and saw the package that came from Gothenburg, Sweden’s hard rock quartet The Last Band! But wait, this package is huge! Upon opening, and a quick look on the band’s website provides clarity… vinyl. Ahh yes, vinyl and not just any vinyl, oh no, but heavy grain, clear and limited to 300 copies. No CD issue for the debut release Rats Of Gothenburg, however all the tunes are available on their site for you all that desire the digital medium.

The Last Band‘s debut is a heavy heavy record, no pun intended to the heft of the vinyl, but the music is loud, sleazy, punky, sludgy, angry and just plain infectious. From the opening bars of the album opener “The Crow”, I knew I was in for a treat and that epiphany gets cemented in stone by the chorus of the second track “Nobody Touch You” which is an ode to getting messed up and relating with the sex of your choice. You can not help but scream along with Coffe Blood while bangin’ about. This musical encasement in stone continues to fossilize through “Get Behind Me Satan” and in turn the album’s entirety. The deliberate tongue firmly planted in cheek, play on words in naming singer Coffe Blood is far too accurate and appropriate as through the duration of the vinyl, you wonder how he can wail like this for any length of time without severe damage to his self. Very raw, yet hauntingly melodic, certainly quite befitting, but how on earth can he do this more than once, let alone for an entire album and also night after night promoting the band live? Maybe the homeopathic healing properties of whisky and nicotine?

On the Rats Of Gothenburg, The Last Band have created ten hard/sludge/sleaze/punk rock songs that if I have to attempt to compare to anyone, it could be an amalgamation of The Dwarves and their songs like “Fuck You Up” and “Get High”, and most anything by Al Jorgenson and Ministry (sans the industrial vibe, mostly the vocals and the shear heaviness of the band). There’s also a massive sleazy/sludgey dose of Monster Magnet and most everything they have done, but especially songs injected by the sleazy attitude infused “Spacelord” and lastly an equally hefty dose of the angry yet completely melodic attributes of Wednesday 13 and his solo and Murderdolls efforts (minus the ’50s surf vibe).

The Last Band are playing quite competently on this release with heaping mounds of piss, vinegar and attitude. Coffe, Alex, Robert and Punkin’ have certainly come into a sound and individual personas that reflect their desire and craft. They look as dirty, greasy and cool as they sound adorned in their denim jackets and their ink encased bodies. I am anxiously anticipating the next installment from Gothenburg’s finest. It will be interesting to hear if they can maintain the sheer angst, tongue n’ cheek humor and unadulterated power they captured on their debut album Rats Of Gothenburg, especially in standout tracks like the first video single “Rats”, and the insanely heavy “The Crow”, “Bullet” and “All I Need” (with its tasty guitar solo). If so, we will all be in for one hell of a ride.

Production:
Produced by Henryk Lipp and The Last Band

The Last Band‘s “Get Behind Me Satan” video:

The Last Band – “Get Behind Me, Satan” A BlankTV World Premiere!

http://www.BlankTV.com – The Last Band – “Get Behind Me, Satan” – Like this video? Come see thousands more at the Net’s largest, uncensored, completely d.i.y…