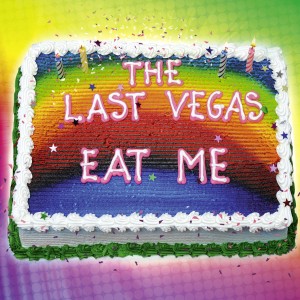 Review by Bobby Caughron:
I was excited when I checked my inbox and found a new album by The Last Vegas — a band that I have been really impressed by and really disappointed by depending on the release. So which will this album be?

Well, let’s start with the cover, and never mind that it’s immature as so am I sometimes. I have to say that it is one of the ugliest, most boring excuses for an album cover that I have seen in years. It literally looks like they put little to no effort in creating it. I remember watching the movie Animal House as a teenager. At one point in the movie, the guys are driving a float for the parade that looks like a big cake with the words “Eat Me” written on it. I remember thinking that it was one of the funniest things that I had seen at the time. I was immediately reminded of that scene when I saw the cover of the new album by The Last Vegas, which shows a colorful birthday cake with the same exact words written on it.

Now for the music inside. Thankfully, the music is not as bad the cover. Having said that, it’s really a mixed bag of some songs that I really like and songs that make me wonder what the hell they were thinking. The album starts off with “Bloodthirsty” which is a decent rocker with a nice swagger factor to it. At times, the vocals sound a bit like they were recorded in an underground tunnel and it kind of takes away from what otherwise would be a great track. “Here We Go Again” is a little closer to the sound that I liked from Bad Decisions, which was a really great album. “Universe You” is the most glaringly obvious song that not only does not fit with the rest of the music presented here, but is a blatant rip-off of a Lenny Kravitz song. “Hot Fudge” is probably my favorite song on here. It’s creative and has a nice sleazy rock feel to it. “Along For The Ride” isn’t bad, but it also doesn’t really stand out by any means.

“Voodoo Woman” is a step back in the right direction. It’s a solid rocker and one of the stand out tracks on Eat Me. Another track that seems a bit average is “Love’s Got Nothing On Me.” It’s a decent ballad, but it seems to be lacking anything unique to make you remember it. “Hard To Get Over You” is another track that just seems to be closer to filler than a standout track that you want to listen to again. It sort of reminds me of background music from your local pool hall. It’s good for what it is, but you’ll forget about it as soon as it’s finished. “To Be Treated” ups the rock factor a bit, but it seems a bit generic as well. “Anything It Takes” is a decent moody, slow rocker that tries to bring out some real heartfelt emotion. The final track “From Hell” is another track that just doesn’t really fit with the other material. It sounds like a great song to be featured in a movie soundtrack, but sounds more like industrial electro-rockers My Life With The Thrill Kill Kult than anything else from The Last Vegas.

The press release states that The Last Vegas had a limited amount of time to record because of the geographical locations of some of the band members. I really believe that this album was rushed and contributes to the averageness of it throughout. This band is capable of making much better songs than what’s represented here. Although, this surely comes across as a negative review, I’d like to say that it’s not all bad, it just seems average for the most part and I was really disappointed, simply because I know that this band is capable of so much more. My advice to The Last Vegas is take your time and give the listeners an album that really blows them away, rather than just getting an album done. Here’s hoping that the next album will be on par with the fantastic Bad Decisions album.

Review by Mark Hovarth:
As a band ages and matures, they often branch out or take on an entirely different direction. With 2016’s release of Eat Me, Chicago’s The Last Vegas seem to have taken on an exercise in versatility.

There are so many different styles on Eat Me. The band covers overtones from the ’60s with the Beatles-esque “Universe You” to some more ’70s groove-oriented rock with tracks such as “Hot Fudge” and The Faces’ styled “Hard To Get Over You.” The Last Vegas have really done it well. The only track that really sticks out as oddball on Eat Me is the final track “From Hell” since it sounds more like something from Marilyn Manson’s discography than a The Last Vegas song. But as mentioned, this album seems to explore versatility.

What Eat Me has in common however is that all compositions swing with rock-steady percussion, assorted chunky guitar riffs, and multiple choruses amid dramatic start-stops throughout the record. With Eat Me, the band has confidently branched out from the shadows of being another “’80s rock” band and now own their matured sound. Fans of The Last Vegas will however feel at home with other tracks carrying their more fun signature sound such as “Bloodthirsty”, “Along For The Ride” and “Voodoo Woman.” One outstanding feature on Eat Me (as with all The Last Vegas albums) is the stunning display of Chad Cherry’s vocal range. Cherry covers so many different vocal styles and pitches that it often sounds as though the band has employed multiple lead vocalists.

As with many rock bands, The Last Vegas have been bounced around from label to label like a hot potato. It was disappointing to hear the band was basically left for dead by Nikki Sixx’s label Eleven Seven Music in the years after they had won a contest put on by Mötley Crüe to “pass the torch” of rock and join them as supporting act on the first Cruefest tour in 2009. The Last Vegas were then picked up by eOne in USA/Canada and AFM Records for European distribution in 2012. The large German-based hard rock and metal label, AFM Records, has continued on with The Last Vegas to release Eat Me next month. I hope that the band can flourish with the exposure that AFM Records can lend to them and continue their careers for years to come.