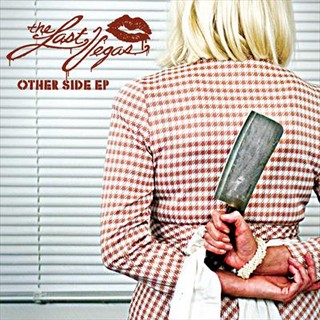 Review:
When I first heard The Last Vegas back in 2009 I was immediately blown away by their throwback ’80s sound. Whatever Gets You Off was so good that Sleaze Roxx named it the best album of that year and forced me to purchase their entire back-catalog. With the Other Side EP the members of The Last Vegas, or victims as they refer to themselves (you’ll understand if you watch their current video with B-movie icon Sybil Danning), give us a little taste of what will appear on their upcoming full-length that is due sometime early next year.

Screaming out of the gates is the title-track, a single that lives up to anything on the band’s breakthrough Whatever Gets You Off effort. With a heavy bottom end and a chugging guitar riff, “Other Side” offers up a darker element to The Last Vegas‘ retro rock sound and makes one salivate with anticipation for the new album. “Evil Eyes” displays a more sinister approach for the band as it seems to slither along to a hypnotizing beat before “It Ain’t Easy” finds the rockers slowing down and taking a page out of Buckcherry‘s playbook. Wrapping up this five song teaser is “My Way Forever” (excluding the radio edit of “Other Side”, which is nothing more than the single with swear words bleeped out), an adrenaline filled rocker that will have you stomping your feet and throwing your fists in the air.

If the Other Side EP is any indication, The Last Vegas‘ 2012 release will be another strong candidate for album of the year. Hard rock has enjoyed a slight resurgence in the last few years and The Last Vegas are not only helping lead the way but are quickly becoming one of the genre’s brightest stars — Nikki Sixx was definitely onto something when he chose these rockers over 8,000 other contestants as the winners of Motley Crue‘s ‘Your Chance To Make Rock History’ contest… too bad Sixx: A.M. wasn’t this entertaining. Regardless of what other groups release new music in 2012, these Chicago natives are already making it a highly anticipated year for rock music.