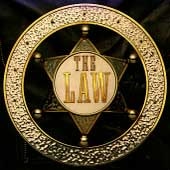 Review:
The Law is the collaboration between legendary singer Paul Rodgers (Free, Bad Company and The Firm) and drummer Kenney Jones (The Faces and The Who). The band played a relatively bland form of AOR, and had a minor hit with “Laying Down The Law”, one of the few songs penned by Rodgers.

“Stone” and “Tough Love” rock fairly hard, and the ballad “Come Save Me (Julianne)” is very good. The Law featured the first recording of “Miss You In A Heartbeat”, a ballad written by Def Leppard‘s Phil Collen, and which would later be a huge hit for that band. Although Rodgers and Jones are very talented, they didn’t rock as hard as they could have, and thus released a sub par offering. The Law would have a difficult time getting a conviction, and thus receive only one thumb up.