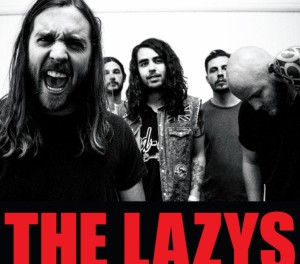 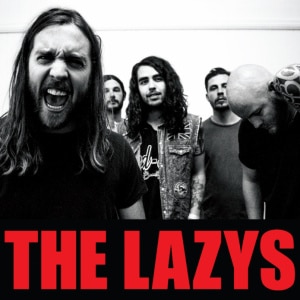 Review:
There have been many great bands that came out of Australia, but to me, the best Australian bands can be summed up in one word. Raw. I like my Australian bands raw. Gritty, hard nosed blue collar music that you can bang your head to — Acca Dacca, Silverchair, Jet, The Vines, and Wolfmother. The newest band to emerge from the Australian wild is The Lazys. This album is the best of Australian raw rock and includes Canadian content in the lyrics and production (Gus Van Go, Werner F, and GGGarth Richardson). Now let’s explore their album.

“Show Me What You’re Made Of” — This song begins the album with a frenetic energy. Great guitar work, fast paced playing and gritty vocals. Has kind of a Black Crowes meets Silverchair feel to it.

“Shake It Like You Mean It” — Cymbals and catchy guitar work begin this song. It is a toe tapper that also gets your body swaying. Even this old dude would embarrass himself on the dance floor if it came on. Such a great blend of bass, drums, guitar and vocals. It seems a little more polished than raw. Kind of like how a Brian Johnson era AC/DC song sounds compared to a Bon Scott song. It must have helped with the polishing that Ian D’Sa from Canadian band Billy Talent co-wrote it.

“Really Ready” — Back to raw. This song has an infectious energy to it. The vocals are a half scream/half growl. The background vocals remind me of Angus and Malcolm Young at their best, and the instruments blend perfectly in this song.

“Black Rebel” — I searched high and low for this album on vinyl. I was going to see the band and wanted something to listen to before the concert. I found a music shop in Toronto that had one, but got there five minutes after they closed. So I bought the CD instead. I am glad I did, because this song is not on the vinyl copy (I bought one at the show). Whoever decided this was the song to leave off made a mistake. This is one the best songs on the album. Leon Harrison‘s vocal sound higher pitched and have a nice contrast to some of the other songs, and the background vocals are again a nice touch.

“Love Your Gun” — A sort of anti-gun song. My favourite crusade songs are hard rock and heavy metal. It just doesn’t seem as preachy when you include heavy music along with protest lyrics.

“All Fired Up” — Sweet guitar lyrics and pounding drums begin this song. “Are You All Fired Up?” the band asks in the background and Leon responds “Get ready to lose yourself.” Sweet bass and drums fill the middle of this song to let us know they are not background noise. The screams and guitar wails end the song on a high note. (Note: The album version is a cleaned up version, different than the one on the video below)

“Let You Know” — Has a slower, bluesy Black Crowes feel to start off. Such a sweet song. I actually got chills the first time I heard it. When the tempo picks up it has kind of a Sloan flavour to it.

“Howling Woman” — Side 2 of the vinyl begins with a wail. Les Paul mixed with pounding drums and growling vocals. Sign me up. The song is about who I can only assume is a groupie named Sweet Suzie that makes Leon go weak at the knees. This song will have the same effect on you. Extra points for a sweet guitar solo in the middle of the song.

“Wild Heart Races” — Vocals are even more growly than normal. The bass here is enticing, and the drums keep the bottom end in the forefront. “You’re wild heart races, and I wanna chase it.”

“Hard Luck” — “Go hard or go home” and “We are rock ‘n roll” are the lyrics that not only define the song but the band. Co -wrote with members of Canadian band The Trews.

“Punk Come N Get Me” — The word punk in the title is fitting. Leon Harrison sings this song in a punk styled manner, and the faster beat of the music would be fitting on any anti-establishment album. He is antagonizing any bullies out there that he isn’t afraid of them.

“Love Sick Boy” — Has sort of an ’80s hairband ballad sound to it. It could have fit on some of the best Poison or Motley Crue records back in the late ’80s. Then the electric guitar and drums pick up where the acoustic left off. The blend of ballad and hard rock song are a nice combination.

“Anxiety” — The vocals here have kind of a Megadeth feel to them, only not near a nasal as Mustaine. This song is just a slight notch below the rest on the album. I would have personally left this off the vinyl and included “Black Rebel.”

Overall, a really great record. Well worth the purchase price.