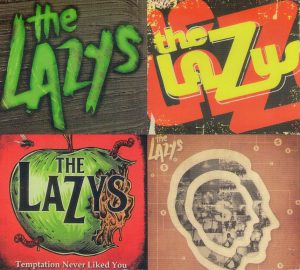 Review:
Until The Lazys‘ self titled album was released in 2014, the world outside of Australia was not aware this band had already released four EPs and one album in their native Australia. They won the Jack Daniels competition for best live act in Australia in 2008, so they obviously had a following back home. This album is the ‘best of’ from those years.

“Brothers In Arms” — Sorry, Mark Knopfler fans — this is not a Dire Straits cover. This is more ’70s era Aerosmith or Alice Cooper meets very early AC/DC. If Joe Perry and Dick Wagner had gone through Australia in 1974, and joined Bon Scott and crew in the studio, this may have been the out take. Really cool bass and guitar rule this song.

“Oh Girl” — The wailing sounds to me like “Oh Gail.” The bass lays down a funky, chunky groove on this song, which isn’t necessarily a bad thing.

“Union Of The Underdogs” — A really catchy song, with some neat background chants that are reminiscent of AC/DC, and some great guitar and bass.

“Sunshine City” — A really good song. It starts off like a hard rock, sports team theme song (it was adopted by Fox Sports), morphs into a softer Brit pop style ballad, and back again.

“Hey Mr Mr” — Not a shout out to the cheesy ’80s band. A hard driving, antagonistic number with growling, yelling, and solid musicianship.

“Kiss Your Life Away” — Starts off fast and hard driving before morphing into a ’80s New Wave area that actually works. I prefer the harder edged section, but the mixture blends nicely.

“Friend Like You” — A nice song. It reminds me of a slower Green Day song. More acoustic than the rest of the album, it shows that the band isn’t a one trick pony.

“Second Hand Smoke” — Sort of like Oasis meets folksy, alternative band. With better guitar work than any of the above.

“Society’s Whores” — Sweet guitar licks and crashing cymbals start this off. Then the growling vocals take over. I also notice a bit of a megaphone into microphone here. Perhaps an unknown, but welcome tribute to Scott Weiland.

“Angels Sun” — Acoustic guitar and piercing vocals start this song off. The electric guitar has kind of a moaning tone, and I believe I hear some orchestral strings mixed in. The orchestral touch is nice in a harder song. It is a weird mix of heavy grunge, Oasis and an orchestra that really pulls it off.

“Temptation Never Liked You” — Heavy droning begin this song off. Has a bit of an Alice In Chains meets stoner metal theme going on that I really like. The wailing guitar riffs are pretty awesome too.

“My Mumma” — Cymbals ticking, drums crashing and fast pulsing guitar riffs rule this song. “I was born to break the fucking rules. My Mumma always told me ‘Don’t bite off more than you can chew'” Luckily you have not done that with this song, or this album.

A really good mix of ’70s hard rock, stoner, Brit pop and grunge make up this album. We get a glimpse of the band that will become a great party band. Some teething issues as they still were a young, growing band, but the listener is rewarded with finding out where this great band came from.

Reviewed by Boppin from Boppin’s Blog for Sleaze Roxx, April 2016

The Lazys: Union of the Underdogs