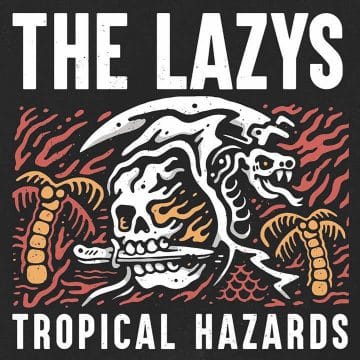 Review:
Some reviews write themselves, especially when you’re talking about a potential album of the year. This is going to be one of those. I’ve been aware of The Lazys for a couple of years mainly due to former Sleaze Roxx contributor Boppin reviewing a couple of their albums consisting of their 2014 released self-titled album and the Younger Years (2007-2011). Despite enjoying the songs featured in The Lazys‘ videos that I posted about in Sleaze Roxx articles in the last few years, I never picked up an album from the group until last week when I purchased the Aussie rockers’ new album Tropical Hazards at their gig opening for The Wild! at Lee’s Palace in Toronto, Ontario, Canada. I was actually going to buy The Lazys‘ self-titled album as well but the group’s merchandise desk’s credit card / debit card machine wasn’t working so I elected to buy just one album (Tropical Hazards) with whatever cash that I had left from what is turning into my favorite “new” band.

I use the term “new” quite loosely since The Lazys have been paying their dues for some time now (since apparently 2006) but they feel “new” to me. For how long have The Lazys been paying their dues you may ask? Well, it appears that the Aussie rockers released not one, not two, not three, not four but five EPs prior to the release of their 2014 released self-titled full-length album consisting of Nicotine Soul (2007), Red / Yellow E.P. (2008), Green E.P. (2009), Prison Earth (2010) and Temptation Never Liked You (2011). If that wasn’t enough, The Lazys have also relocated from the always seemingly sunny land from down under — Australia — to the rather harsh winter climate (surely for them) of Toronto, Ontario, Canada. Now that is dedication. Many bands seemingly could learn a thing or two from The Lazys about perseverance towards their end goal. Some of the greatest hard rock and heavy metal bands such as Judas Priest didn’t really find “their sound” until many years and albums later and I truly think that it wasn’t until the release of Tropical Hazards that The Lazys finally found their niche so to speak.

What I truly love about seeing a band play live for the first time without knowing many of their songs is that the tracks then come alive once you listen to them after the concert. After being blown away by The Lazys‘ performance at Lee’s Palace last week, I popped my newly purchased CD in my car during my ride home. That was eight days ago and The Lazys‘ album Tropical Hazards has been in my vehicle’s CD player since that time until yesterday when I bought The Lazys‘ self-titled album after seeing the band play live once again at The Casbah in Hamilton, Ontario, Canada. I simply couldn’t resist doing the one hour drive or so to get another fill of The Lazys live. After listening to most of The Lazys‘ preceding album — their self-titled one — I am convinced that The Lazys took the best features from their best songs on that album to deliver a simply magnificent record in Tropical Hazards with nine very good to fantastic songs (there’s one I am not crazy about).

There’s no question that The Lazys are influenced by Australia’s greatest band ever — AC/DC — but on Tropical Hazards, The Lazys have settled into a bit of a formula that works really well for them. You have the screaming but raspy vocals of singer Leon Harris, you have some big time background vocals, some great yet at times simple guitar riffs and mainly upbeat faster paced material except for the two ballads “Young Modern Lightning” and “Somebody’s Daughter.” On The Lazys‘ preceding self-titled album, there were a handful of standout songs such as “Black Rebel,” “Howling Woman” and “Shake It Like You Mean It” but there were also some fillers or songs that were simply not that well constructed. This time around, The Lazys simply deliver one zinger after another.

Usually, if an album has two to three really great songs such as The Lazys‘ self-titled album, you can’t ask for much more. After all, the “older” bands such as Iron Maiden, AC/DC, etc would likely be pleased with one really memorable song from their latest album to include into their live set. In The Lazys‘ case, there are five tracks that I would consider in the phenomenal category in terms of engagement, great melodies and overall catchiness. The first four tracks consisting of the first single “Nothing But Trouble,” the slide guitar filled “Little Miss Crazy,” the peppy “Picture Thieves” and the awesome story telling “Half Mast Blues” as well as the album closer “Take Back The Town” can each give me goose bumps at any given time. The rest of the tracks on Tropical Hazards are also solid with the exception of the kind of bland ballad “Young Modern Lightning” which is almost an anomaly in that I often just skip that song while the rest of the tracks are all so good. Given that the other ballad “Somebody’s Daughter” is actually quite engaging, I wish that The Lazys would have just elected to forego putting “Young Modern Lightning” on Tropical Hazards. Nine killer songs would have been just fine, thank you.

Last year, after just a few listens, I knew that The Wild!‘s Wild At Heart album would be a contender for the top album of the year and if it wasn’t for Tales Of The Porn‘s debut album H.M.M.V. stealing their thunder mid-way throughout the year, Wild At Heart would have finished as the #1 album on the Sleaze Roxx’s Top Ten Albums of 2017. It’s still really early in the year but Tropical Hazards is exactly the type of album that can finish at the top of Sleaze Roxx‘s year end list for 2018. Do yourself a favour and check out The Lazys‘ latest album Tropical Hazards. You won’t regret it.