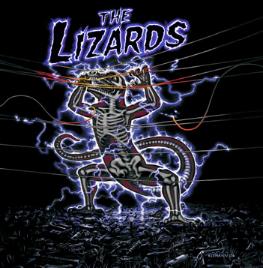 Review:
What do you get when you cross members of bands such as Riot and Blue Oyster Cult with a metal historian? You get The Lizards, a band that takes the best parts of metal’s formative years and drags them into the current music scene. You have some of Black Sabbath‘s darkness, Vanilla Fudge‘s sludge, Whitesnake‘s swagger and Mr. Big‘s melody. Cold Blooded Kings really is a step back in time to when hard rock was finding its footing and gearing up to change the face of popular music forever.

“Cold Blooded Kings” treads into Whitesnake territory while “Down” sounds like David Coverdale fronting an upbeat Sabbath, before drifting into a late 60s psychedelic jam session. “Rising Star” is a nice slower number with some cool slide guitar work. The harmonica and keyboards come out on the instrumental boogie of “Hyperspace’ as the band isn’t afraid to try anything.

It isn’t hard to figure out why Bobby Rondinelli has been with so many influential bands, as the drums rarely stand out like they do on this release. But the entire band sticks out here, and even though a couple of the later tracks miss the mark, this is an album for rock aficionados. Cool stuff, which can be found at www.thelizardwebsite.com.