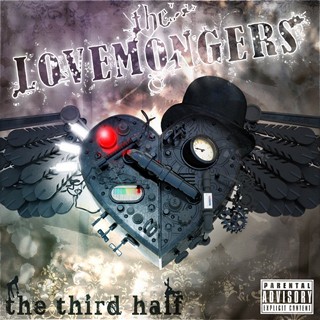 Production:
Produced by Panta and The Lovemongers.

Review:
I hate to be mean, but sometimes for the sake of humanity the truth must be told. And the cold, hard truth when it comes to The Lovemongers is that they are horrible. With a mish-mash of unfocused ideas these Italian newcomers are extremely difficult to listen to — and I give myself credit for being able to sit through this CD three times without trying to remove my eardrums with a butter knife.

I don’t know exactly where to start here, or even where to end, but let’s begin with the vocals of Freddie Leoni. I’m not sure if it’s due to his heavy accent, but far too often he sounds completely out of tune and lifeless. An even bigger gripe though are the songs themselves, which often sound like a bunch of ideas thrown together without much thought. “Swallove” is probably the ‘best’ of the bunch, but even it is plagued by a horrific slap-bass rap section. Beginning with an intro ripped from one of those self-help meditation CDs, it wasn’t far into “Tsunami Surfer” when I began wish this disc got carried out to the bottom of the sea. I lost interest from then on and found myself staring into space while being swept away in a state of bewilderment at what I had just encountered — I may never fully recover from “The Misbehavers”, a track which words can’t even begin to describe.

If there is a shining light regarding The Lovemongers, aside from some of the hilarious sexual lyrics, it is guitarist Frankie Carunchio — the guy can obviously shred, but any talent he possesses is completely wasted here. Think of it this way, you can’t clean an outhouse by throwing a gorgeous woman into the shit — just like adding an impressive guitar solo to these ‘songs’ still leaves you with a pile of unlistenable garbage.

The best thing about The Third Half is that it is only five songs in length — although that’s roughly four and a half too many. If I could offer the guys in The Lovemongers a little bit of advice it would be this… QUIT! That’s right, give up your dreams of becoming musicians and look into careers as accountants, lawyers, or any other profession where annoying people is more appreciated.