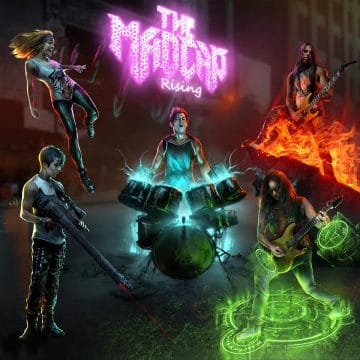 Review:
Say what you will about Steel Panther, they are among the very best at coming up with catchy hooks and melodies in the last ten plus years. When I heard The Madcap‘s debut single “Rock N’ Roll Revolution” more than a year ago, I thought that this was a band — or really an individual in guitarist Deniz Sayman — that could potentially rival Steel Panther in terms of writing catchy hooks, melodies and cool guitar riffs. As it turns out, The Madcap‘s guitarist Deniz Sayman is definitely a good songwriter but not quite at the level that Steel Panther have attained. That being said, he does write catchy tunes with some good variations just like Panther do but sometimes, a little more work is needed to get the songs to that next level.

One prime example is “Storm The Road” which has everything that you need to succeed including a quickly engaging guitar riff, the standard banshee yelp at the start of the song, and a killer female vocalist but somehow the melodies kind of get lost as the song progresses. When The Madcap keep things a little more simple and focused on the great guitar riffs like “Rock N’ Roll Revolution” and “Stepped On A Lego”, the results are stupendous. The Madcap show that they have a lot of versatility as well with their bluesy swingy type track “Long Island Blues” which reminds me a bit of classic Poison when they used to tackle the blues. I am not sure who’s handling the guitar solos — Deniz Sayman or Emre Sarigūn — but not only does each track usually have a good to killer guitar solo but that solo is incorporated so well in the song each time that it feels like a natural extension of the song like Eddie Van Halen used to do in his prime for Van Halen songs. Some of my other favorite tracks on the album are “Aces In My Hand” — with its bluesy and slowed down verses at time and simple but effective chorus — and the bonus track “3 2 1” which happens to be sung by female lead vocalist Izgi Gültekin in Turkish. Oh yeah, The Madcap emanate from the country of Turkey, which I would have never guessed would produce such a great glam rock band.

Another link to Steel Panther is that The Madcap mirror the former’s mantra of not taking itself too seriously except that The Madcap do it in a PG type of way. A song like “Stepped On A Lego” — which is quite catchy and has a killer solo — certainly shows a band with a sense of humour but at an almost child like level or perhaps at a level that a parent with small children might relate to. Another song showing The Madcap‘s PG sense of humour is “Question Of A Lifetime” where the band asks why are all the drummers in the group getting fat and eating all the time. Clearly, The Madcap have a great sense of humour but it will likely not appeal to the more sleaze “fuck like a beast” type rockers out there.

Overall, I really like The Madcap‘s debut album The Madcap Rising. The subject matters that are tackled in The Madcap‘s songs feel too PG for my liking (I guess I am just accustomed to the sex, drugs and rock n’ roll topics) but there’s no question that the Turkish glam rock group’s songs are for the most part well crafted and enjoyable to listen to.

The Madcap‘s “Stepped On A Lego” video:

The Madcap – Stepped on a Lego

The Madcap‘s “Aces In My Hand” video:

The Madcap – Aces In My Hand

The Madcap‘s “Put The Blame On Me” video:

The Madcap – Put The Blame On Me