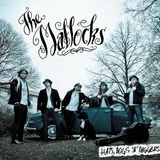 Production:
Produced by Carl Vikman and The Matlocks.

Review:
I’m always a little leery about checking out the latest release from The Matlocks. I know it is silly, but I think the reason for that is because the band’s name is so ‘un-rock’. Their music has yet to let me down, but there is just something about the name The Matlocks that turns me off.

Luckily for me all it took was inserting Hats, Dogs ‘N’ Daggers into the CD player to alleviate all my unfounded fears. One again this Swedish band plays some of the best retro rock out there today with a healthy does of humor added to the mix. The guys just keep getting better and better as they lift riffs straight off Alice Cooper‘s early 70s classic Love It To Death, mix it with a hint of punk and update the entire mixture for the 21th century.

The band immediately kicks things into high gear with the rapid fire drumming on the opening cut “Part Of The Plan”. The song is about falling in love with a man, but with the way The Matlocks write lyrics you’re just not sure if it’s another of their tongue-in-cheek ideas or something else completely. I’m guessing the later because by the time the bouncing “Muffin” rolls around the guys are singing about ‘stuffin’ and ‘breeding’. For completely politically incorrect lyrics check out “Fat Fuck” which contains gems such as “I’m a fat fuck and I ate the whole fucking buffet.” Finally you have “Dez Is More” (I have no clue what that means) which finds the band hitting overdrive for a satisfying burst of punk inspired energy.

If there are any flaws on Hats, Dogs ‘N’ Daggers it would be the lack of variety and a couple of songs that don’t live up to the rest of the CD. Several people may also find the band too modern sounding, and I could understand that even though they are playing a variation of music that ruled in the experimental 70s. Those are pretty minor complaints though and people that like no-frills rock should find something here that they enjoy.

If a band such as Jet can get their fifteen minutes of fame then why aren’t people taking notice of The Matlocks? These guys do retro better, with a better look, more conviction and with more consistency. Hopefully one day the general public will take notice, even if just for a short period of time. The Matlocks deserve it, because even if their moniker sucks the music doesn’t.