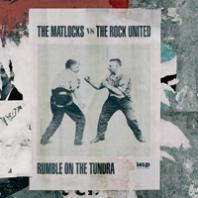 Review:
Rumble On The Tundra is a split CD featuring The Matlocks and a band I had never heard before, The Rock United. The album contains six songs from each (and one short intro) in an all-out battle to the death – so pull up a ringside seat and “let’s get ready to rumble”.

The Matlocks come out with both fists blazing and displaying more energy then I remember. They seem ready to take on bands such as Jet for their position at the top of the retro rock heap. The group fires off a barrage of infectious riffs and seems to have taken the best moves from D-A-D‘s training manual (especially on “Riding The Blues”). The guys seem more concerned with song structure and killer rhythms then showing off with solos, and it works very well for them. The beat of “Motorized Vehicle” and the humorous “Buttcrack Baby” would be enough to lay most opponents down for the ten-count.

However The Rock United aren’t your typical stiffs that will simply take a dive. They have an unorthodox delivery, melding Rolling Stone grooves with biker rock attitude. But their real secret weapon is vocalist Fredrik Risbo‘s voice, who possesses one of those gravelly whiskey soaked vocals that I could listen to non-stop. They completely nail amphetamine driven tongue-in-cheek-rockers like “The Devil Speaks Swedish Tonight” and “Teuvo Does Dallas”, which may in fact be two of the best songs released this year!

I really wanted to pick a winner here because draws are always such a letdown. Should the decision go to The Matlocks for consistency and commercial appeal, or should The Rock United score the victory based on potential, aggression and that incredible voice? Against my better judgment I’m going to call this a draw because everyone is a winner on Rumble On The Tundra.