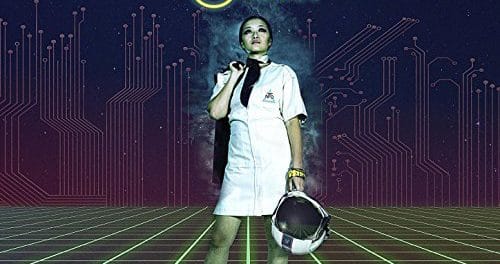 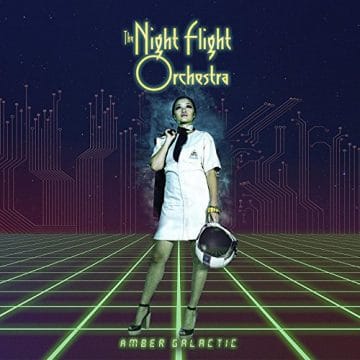 Review:
The likelihood that you haven’t heard of The Night Flight Orchestra is relatively high. The fact that the band features Soilwork frontman Bjorn ‘Speed’ Strid and Arch Enemy/Spiritual Beggars/Mercyful Fate bassist Sharlee D’Angelo probably has the average Sleaze Roxx reader shrugging their shoulders. They come from great bands and pedigrees albeit from ‘heavier’ bloodlines.

The Night Flight Orchestra was formed in 2007 by ‘Speed’ and guitarist David Andersson. They were soon joined by D’Angelo. The Night Flight Orchestra has gone on to write, record and release three albums  — Internal Affairs in 2012 and Skyline Whispers in 2015 with the third being the just released Amber Galactic — which is an outstanding classic/progressive rock record. On Amber Galactic, you’ll hear KISS, Deep Purple, Rush, Styx and REO Speedwagon amongst others. The result is a fantastic pedal to the metal melodic rock tour de force.

Amber Galactic opens with the space rock meets prog rock with the groove of [Deep] Purple fronted by Graham Bonnet. It’s incredibly good! “Sad State Of Affairs” sounds like [classic] KISS covering a great Rolling Stones B-Side. “Domino” could easily be confused with an edgier Toto song — if there is such a thing — that you’ve never heard before. “Star Of Rio” features a killer chorus that crawls into your skull squats there and the best track surprisingly on the album is “Jennie” — a ballad written by way of a Supertramp filter. The Night Flight Orchestra has delivered quite possibly the best album of 2017. You simply haven’t heard it [yet]. The Night Flight Orchestra wear their influences on their sleeves; anything and everything classic rock from the ’70s through the ’80s and they do so with great success. Very few bands are capable of delivering a retro sounding album that is genuine but The Night Flight Orchestra have done just that.

Reviewed by Ruben Mosqueda for Sleaze Roxx, May 2017

Official music video for “Gemini” by The Night Flight Orchestra. From the album, AMBER GALACTIC, out worldwide. Order at: http://nuclearblast.com/tnfo-amberg…