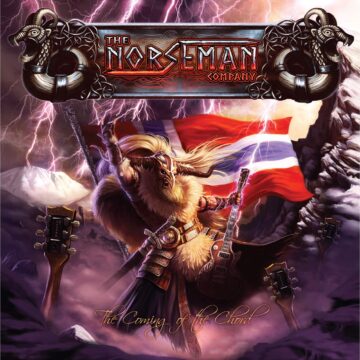 THE NORSEMAN COMPANY
THE COMING OF THE CHORD
Released on February 5, 2021 (Perris Records)

Review:
What do you initially expect when presented with an album like this? Vikings…. Gothic imagery…. Prog rock meanderings or death metal? That’s exactly what I thought when asked to review this but, thankfully I was completely and utterly wrong, I am delighted about it.

This is the brainchild of Geir Arne Dale and features Age Sten Nilsen of Wig Wam among many of Norway’s finest and most renowned musicians such as Jarl Iver Andreassen and countless others. “Here Comes Rock N Roll” storms gloriously through the speakers and wouldn’t be out of place on any KISS or Poison album and is complete with rousing, if stylised, lyrics and stadium dwelling singalong chorus. “Master of The Dark”  changes tack ever so slightly with echoes of blues era Whitesnake and its distinctly David Coverdale inspired vocals and rather daft lyrics about witches, warlocks, etc, which was the first of not very many slight blips for me. “When The Hammer Falls” goes back to business whilst still retaining the better Whitesnake elements. These also remain on the evocative ballad “Since You’ve Been Gone” that is a real lighter waving track in the finest tradition and absolutely none the worse for it.

“Stone In My Shoe” is a real swaggering rocker that has almost flawless performances from everyone involved including a fine guitar solo that gets the timing just right. “Dirty Nelly” is a rollicking, seedy affair that wouldn’t be out of place in a Diamond Dogs or The Quireboys set and the boogie style piano playing suits the late night affair perfectly. “Gimme Some Rock N Roll”  blows any remaining cobwebs away and goes back to the KISS inspired stylings that served the opening track so well. “Don’t Wanna Lose You” is a glorious mid-tempo song  that could easily have been written by and for any Jani Lane project – it’s really that good.

“In This Neighborhood” is up next and, like so many of the tracks on here, has a really familiar feel to it but in a very good way. You think you already know it from somewhere and that’s the pleasure of so many of the songs featured here. “Loud & Proud” once again channels the KISS, Whitesnake and even Danger Danger obvious inspiration and possibly should’ve ended the album the way it started – with a joyous punch – but that is left to the rather disappointing “One Step Behind” which, although perfectly competent and New Wave of British Heavy Metal in style, would have been better served as the penultimate rather than final track, and would even have benefitted from that fact.

It is a really terrible project name and album title that seems to shy away from the actual content which is, quite simply, great fun ’80s style glam/hard rock that everyone involved in would appear to have had a great time doing, and it shows. Kudos to Geir Arne Dale for bringing it all together and amassing such great players with impeccably clear production throughout. There is one old adage that defines this release and that is never judge a book (or band name in this instance ) by its cover and I think you would struggle to find a better example of that in any current release. Pay no mind to the imagery and just hit play because this album is simply brilliant fun!

The Norseman Company‘s “Since You’ve Been Gone” video: