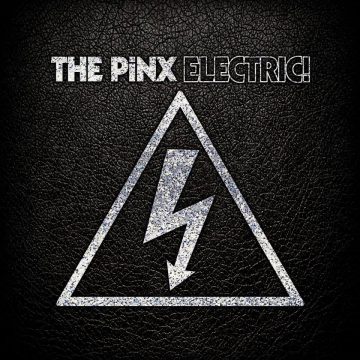 Review:
Since banding together in 2008, hard-rocking guitarist / singer Adam McIntyre and Atlanta band The Pinx have rolled out four well received platters of raw and loose rock and roll including last year’s 11 song blast of southern boogie woogie Sisters & Brothers all while unexpectedly roaring forward only to be stopped head on by that pandemic thing the whole world is fussing over. Well maybe stop is a bit off the mark. Seems that McIntyre handles downtime pretty good. So far in 2020, he has not only assisted in creating solo albums for himself and bandmate Chance McColl, but the guy has even managed to pull the main gig together for a brand spanking new EP!

Set to land on August 14th, The Pinx latest release Electric! is a cool half-album of in your face kicking southern-based romp and roll that takes the band’s music up an energetic notch that according to McIntyre was created out of a desire to create “the most lean, energetic guitar fest” that he and co-guitarist Chance McColl could muster. Sisters & Brothers certainly landed the kudos but McIntyre was downright determined to not let the pandemic bury his enthusiasm to try and not only raise the bar, but do so in over half as many tunes. This might at least partially explain why the final build up to Electric! includes the official release of second single “Hammer of The Dogs”, a blistering dose of heavy groove rock interjected with fits of moody melodies. McIntyre claims that the vocals on this new batch of songs puts his “best rock foot forward” and I couldn’t agree more as half the tunes fly by pretty hard and fast including foot down rocker “Bad Behavior” and Electric! kick-off bass-driven single “It’s Electric.” Take note – if crowded, sweaty booze bar rock and roll is your thing, you’d only be hurting yourself not to tune in.

Now what good would it do The Pinx to totally leave off the tried and true bread and butter rock and roll they pull off better than most? Well fans of that other sweaty side of the band need not fear as McIntyre and crew once again mix it in marvelously with infectious power pop and roll tune “Victimless Crime” and the deliciously doleful “See You Later”, another catchy track with great classic rock break that closes the album on a slightly more modern note. Even on the more melodic side of Electric!, The Pinx don’t forget to bring along the rock and roll.

Despite containing less than half its predecessors tracks, this latest offering by The Pinx is a more than suitable follow up to their successful 2019 full-length record, if anything because even with just five songs, it covers a tad more ground musically while staying true to the sound and vision of McIntyre and company. It’s a solid EP that fires easily on all five cylinders and delivers on pretty much every thing that makes rock and roll Electric! With the pandemic making it nearly impossible to get out and catch a band live for the first time, it’s a welcome distraction that some groups are choosing to make good use of the downtime over just rolling over and hitting the permanent snooze button for a few months. Yeah, it might not be as cool as the real sweaty live thing but at least with new releases like Electric! to help keep fans from getting bored out of their ever-quarantined minds, we at least have something to crank up and rock across the den to.

The Pinx‘s “Hammer of The Dogs” single: