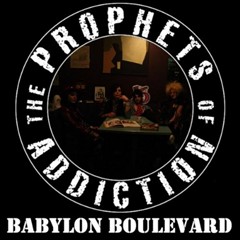 Production:
Produced by The Prophets Of Addiction. Mixed by Phil Soussan.

Review:
Pretty Boy Floyd have often been accused of being style over substance, and that was during their late ’80s peak! Fast forward a decade in the colorful Pretty Boy Floyd story and you would find the arrival of glam veteran Lesli Sanders, who became one of the bassists in the band’s revolving door line-up. Today Sanders is promoting a new band called The Prophets Of Addiction — a band that has a hint of his old partner’s image, but a much different sound.

After so many years struggling to a make a name for themselves a musician could become very bitter, and even though Babylon Boulevard has a dire sound when compared to Pretty Boy Floyd‘s party glam, it is by no means an album that is mad at the world. The reason this CD has a slightly darker feel is due to the vocals of Lesli Sanders himself, who is a cross between Faster Pussycat‘s Taime Downe and The Dogs D’amour‘s Tyla — in fact I dare you to tell me the title track doesn’t sound like an early Dogs D’amour track! Of course spending so much time within the glam scene Sanders‘ music can’t help but exude elements of the early ’90s punk-glam Sunset Strip sound. Even the mix by former Ozzy Osbourne bassist Phil Soussan keeps the sound real and raw like those struggling glam bands of old.

If you’re looking for an album that will liven up your parties you may want to skip Babylon Boulevard because The Prophets Of Addiction are a much more mature effort. “Hang Me Up” kicks things off with a relatively straight-forward rocker and introduces Amit Leeron and Rev(x)‘s excellent ’70s inspired guitar tone that permeates throughout the disc. “Alter Of Altercation” and “Self Portrait” are both good mixes of punk and rock, “Mistress Addiction” slows things right down but works very well and “Still Alive” gives the band a dark, dreary and heavy feel — it all makes for a cohesive yet varied album.

With equal parts of The Dogs D’amour, New York Dolls and slight ties to the Sunset Strip glam scene, The Prophets Of Addiction have released a respectable album. Babylon Boulevard as a whole may won’t immediately jump out at you — although Leeron and Rev(x)‘s riffing surely will — but it is one of those albums that slowly grows on you. Lesli Sanders may have ransacked his mother’s make-up drawer years back, but with his new band he proves that there is more to him than just image.